'The Eyes of Tammy Faye': that woman's a saint 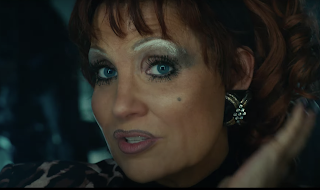 The Eyes of Tammy Faye

Is it possible to be a pure person? Guileless, full of good will, seeking only to unite the worlds of God and man? This is not a question asked in The Eyes of Tammy Faye, a biopic that portrays its central character as a kind of secular saint. The spectacular central performance of Jessica Chastain as Tammy Faye Bakker makes it worth the watch, but her tales of success and suffering is really an indulgence in alternative history.

Chastain is so vibrant in her rendition of the televangelist that everyone around her pales away, seems dowdy even. She loves Jesus, she wants to spread the Gospel, she wants to help people, even reaching out to AIDS patients at a time when most of society shuns them (she remains a gay icon). If only she could trust those around her! No one has cried as much, in as many ways, as Chastain does here as Tammy Faye.

But how true is any of this? The film must walk a fine line between mocking its subjects and taking them seriously, erring on the side of seriousness when in doubt. Andrew Garfield, playing husband Jim Bakker, is the architect of her doom but does not seem to have enough going on upstairs to be a criminal. The corrupt and philandering TV preacher is played as an affable doofus.

We see the on-screen confessions, the pleas for money, we see the telephones ring with incoming pledges. Conveniently, we don't examine too closely this shearing of the faithful flock – it’s means to an end, so that our principal players can agonize in vulgarly deluxe surroundings. In the end the Bakkers seem less like sinners and more like victims of bad luck.

By film’s end, Tammy Faye’s face has assumed the grotesque appearance of a Kabuki warrior. Her makeup is a shield against the harshness of the world. We feel sympathy for her, but we are sealed off from really knowing her, unless Tammy Faye was as shallow and literal-minded as she appears to be here. The Eyes of Tammy Faye gives us not a character so much as a heroine.