The NFR Project: 'The Big Parade' 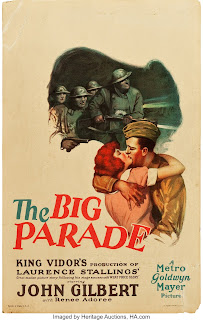 America’s entry into World War I was a super-patriotic affair. After nearly four years of declared neutrality, the nation’s push to war in early 1917 was aided and abetted by a vast propaganda campaign. Participation in the war was cast as a crusade for democracy against the savage “Hun”.

Director King Vidor went to MGM head Irving Thalberg with the request to make a realistic war film. Thalberg turned to scenarist Laurence Stallings, a veteran who lost a leg in the Battle of Belleau Wood. (He was famed due to his co-creation of the hit anti-war play “What Price Glory?” in 1924.) Stallings produced a script that closely matched his own experience in the war.

The film that resulted was the most profitable one made before “Gone With the Wind” in 1939. It tells the story of a carefree young man Jim (John Gilbert) who joins the Army in a fit of patriotic passion. He is sent to France, where he bonds with two buddies and falls in love with a French girl (Renee Adoree). Their relationship was cemented with a now-famous scene in which he introduces her to the joys of chewing gum.

Jim’s unit’s progression into the front lines is a horrifying one, moving from sunlit fields through woods infested with German snipers to the churned-up mud and trenches of the battlefield. 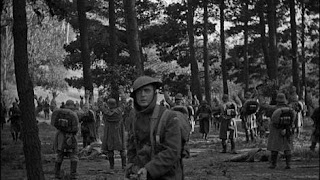 The sequence is filmed with metronymic precision – Vidor beat a drum to which the actors moved in unison. In a harrowing night battle scene, the hero loses both his friends and is wounded in the leg. Jim loses it, but does not let it deter him from returning to France and reuniting with his sweetheart.

“The Big Parade” played for over a year in some movie houses, instead of the usual week most films experienced at the time. Its success inspired a spate of films about the war, including “Wings,” “All Quiet on the Western Front,” “The Lost Patrol,” and “Journey’s End”.

The NFR is one writer’s attempt to review all the films listed in the National Film Registry in chronological order. Next time: ‘Clash of the Wolves’ and the phenomenon of Rin Tin Tin..

Posted by BradWeis at 5:14 PM No comments: