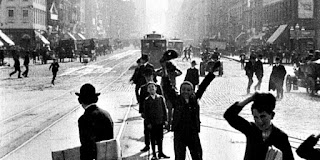 These films bracket disaster. The 7.8 tremblor killed approximately 3,000 people and destroyed 80 percent of San Francisco. Only chance preserved a film made a few days before of the city, giving history an astonishing before-and-after portrait of the event.

Thanks to the diligent scholarship of David Kiehn, it seems that filmmaker Harry Miles got onto the Market Street cable car sometime between March 24 and April 14, 1906, and rode it to the end of the line, cranking the camera as he went. These early “actualities” drew lots of viewers and were replicated in many American cities of the time. On his second try (he and his brothers tried driving in a car but got too much vibration) he made it.

For the first time, it appears that people on the street know what a movie camera is and react to it. The medium is recognized and factored into everyday life, and the Age of Self-Consciousness begins. People peer, wave, look over their shoulders at the camera.

In fact, this actuality is a bit staged. Even this early, civic boosterism is at work. The large number of cars in the film don’t represent the true state of things; many cars come around again and again, passing the camera to make the street look busier.

On April 17, Harry and his brother got on a train for New York with the footage. When they heard about the earthquake, they sent the footage on and returned to shoot footage of the ruined city.

It’s unknown whether the Miles brothers shot any of the post-quake footage that was preserved. What constitutes this film is a hodge-podge of material from all over the burnt district, shot at various times in the weeks following the destruction. It’s the first spontaneous documentary use of film, and a powerful demonstration of what film could do in this respect.

The camera pans over piles of smoking brick. Walls are pulled down. Refugees stand in the street. Again, the filmmaker dresses up the unvarnished truth by staging a meal in the open air; sententious intertitles further diminish the experience by imposing a contrived narrative on it. Refugees leave, arrive; the rebuilding begins.

This post-quake footage would do much to increase the perception of film’s power to capture a fleeting event, to convey emotion (earnestly or no), and, oddly enough, for the written word to tell us what we are seeing, and why.
The NFR Project is an attempt to review all the films listed in the National Film Register, in chronological order. Next time: ‘A Corner in Wheat.’

The NFR Project #15: 'Dream of a Rarebit Fiend'

Bruce Posner classified it as an early example of American surrealism in film, and included it in the epic collection Unseen Cinema: early American avant-garde film, 1894-1941. It took nine days and about $350 to make. It’s a trick film, a gag film. McCutcheon and Porter steal liberally from the experiments of Georges Melies in France, utilizing double exposure, stop-motion and other tricks in the attempt to adapt the comic fantasies of one of America’s most inventive cartoonists.

Winsor McCay was the illustrative genius of the turn of last century. His Little Sammy Sneeze, Little Nemo, and Dream of the Rarebit Fiend dominated the popular imagination between 1904 and 1911 (McCay’s editor Arthur Brisbane took him off that beat to do more “serous” editorial cartooning. What a jerk.)

Fiend originally concerned the nightmares of a deprived tobacco smoker, but soon morphed into a recurring strip about a fancier of Welsh rarebit, a seasoned-melted-cheese-on-toast dish that McCay fancied gave the eater the midnight conniptions. These are not funny, pleasant strips – McCay exposes fears, imagines humiliations, takes on money, marriage, religion. McCay violates topic boundaries as frequently as he does the traditional panel structures. His stretching, expansion, and distortion of forms became a key way for American culture to define the look of nightmare and hallucination.

Due to the strip’s immense popularity, it became worth the challenge to try and put it on film. Here we see a top-hatted, beer-swilling, cheese-besmeared swell (Jack Brawn) who’s gobbling down large portions of the detested dish. He staggers in the classic vaudeville caricature down the street, and makes passes at a prop light post for support as two more exposures run beneath him, one rotating left, the other right. The whirligig effect was disorienting for the time. He even tangleswith a dwarf policeman.

Coming home, he falls into bed, only to find his shoes and furniture dancing away, and tiny devils assaulting his head. A clever switch to a miniature shows the bed spinning like a top; the dreamer rides his bed over town, gets his nightshirt stuck on a steeple-topping weathervane, then falls, crashing through his ceiling with an eloquent splash of plaster and debris (a dummy flops forlornly to a halt on the floor). And another cut, and the live actor sits up in bed, awake. (Could this be the first it-was-only-a-dream movie?) The dreamer, shaken and chastised, flinches and trembles.

It may be the first film with a soundtrack as well. “The Dream of the Rarebit Fiend” was recorded by the Edison Military Band, and no doubt was paired with the film at one time.

Fiend is an amusing exercise, and a fascinating glimpse into how singular solutions to specific filmmaking problems broadened the possibilities for filmmakers to come.

The NFR Project is an attempt to review all the films listed in the National Film Register, in chronological order. Next time: ‘San Francisco Earthquake & Fire: April 18, 1906’ and 'A Trip Down Market Street.’
Posted by BradWeis at 12:16 PM No comments:

Advertising. Promotion. Propaganda. Whatever you want to call it, it starts here.

In 1904, the Louisiana Purchase Exposition in St. Louis drew nearly 20 million visitors. 63 countries, 43 states, and dozens of private concerns displayed their wares on 1,200 acres of grounds. Westinghouse Electric, then Edison’s major rival in power generation, wanted to promote itself nationally in as flashy a manner as possible. How better than to use the most cutting-edge technology available? At that time, the answer was movies.

They hired pioneer cameraman/cinematographer G.W. “Billy” Bitzer from the American Mutoscope and Biograph Company to make a series of films chronicling the industrial processes at their Pittsburgh headquarters. This he did between April 18 and May 16, racking up 29 three-minute “actualities” that played in rotation at the Westinghouse Pavilion at the Fair that year.

The films cover such subjects as assembling a generator, testing a large turbine, working a red-hot chunk of steel with a steam hammer, female employees (here called “girls” winding armatures), along with a few “panoramic” shots that are actually rudimentary dolly shots, made using factory hoists and cranes. That Bitzer could get indoor shots of these closed, cavernous spaces at all was due to the recent invention of the mercury-vapor lamp.

The footage is pure documentation, with no aesthetic ambitions. However, it preserves the sense of how imposing and grand that phase of American industrialism was, when the country still possessed the means of production and served as a workshop to the world. Small figures walk around the huge pieces of machinery, tending them, tweaking them. Associations rise in the mind – here are Alberich’s dwarves, hammering deep in Nibelheim; here are the machine rooms of Lang’s “Metropolis,” and the incipient Morlocks of H.G. Wells.

On the other hand, these aren’t slave laborers, these are upwardly mobile working people who probably made good money for what was highly skilled labor at the time. And in some frames, little human idiosyncrasies surface – the slight but distinct differences in the ladies who are clocking in to work in a seemingly endless row, the way a man taps a valve, a foreman’s saunter down an aisle.

There is conformity on display, and drudgery, but there’s power and innovation too, the sense that, in concert, groups are quite literally forging a new world in front of our eyes.

The NFR Project is an attempt to review all the films listed in the National Film Register, in chronological order. Next time: 'Dream of a Rarebit Fiend.'
Posted by BradWeis at 9:00 AM No comments: