The NFR Project #4: 'Edison Kinetographic Record of a Sneeze; aka Fred Ott’s Sneeze' 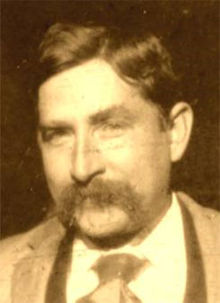 Who was the first film star? It was good old Fred Ott, the office cutup.

The official debut of cinema, in the hands of the Lumiere brothers, was still almost exactly two years away. Thomas Edison was busy trying to crack the problems of making and showing sequential images for profit.

The protean American inventor was also an exceptionally sharp businessman and master marketer (and litigator against rivals) as well. In the hands of his deputy Dickson, after more than two years of experiments, the first public exhibition of a Kinetoscope was held on May 9, 1891. (The film shown there, “Blacksmith Scene,” I have written on previously in the NFR series. The link is here.)

Soon Dickson was filming “actualities” to fill the short-duration loops the Kinetoscope could accommodate. The playback devices were coin-operated, hand-cranked, and could only accommodate one viewer at a time. Cranking the spindle, the images, backed by a light source, would pass in front of a set of magnifying glasses set in a frame. The images were printed on tough, flexible celluloid trimmed to a width of 1 3/8 inches per frame – 35 millimeters, the standard through to the digital age. 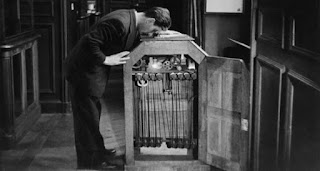 Oddly enough, when the first Kinetoscope parlor opened on April 14, 1894 at Broadway and 27th Street in Manhattan, this film wasn’t on the menu with the familiar “Blacksmiths,” “Horse Shoeing,” “Highland Dance,” and seven others. This film is composed of a demonstration strip of photographs taken to illustrate an article for Harper’s Weekly about the new process (Edison also knew how to work the press).

On January 7, journalist Burton Phillips came to Edison’s East Orange, New Jersey lab. He requested “some nice-looking person” perform a sneeze. Casting about the office, they settled on Ott, a jovial prankster, who was happy to comply.

In the five seconds of the film, we see an affable, sharp-nosed, big-eared, well-fed, luxuriously mustachioed man. He feigns taking a pinch of snuff, sneezes, then looks up just as the film ends. I have run this hopped-up filmstrip a dozen times.

Is it my imagination, or does Fred Ott give us a coy, sly look at the last millisecond? I think he does, making this the first film to really capture feeling and illustrate character. In that last millisecond, film shows its potential. And I think that’s what makes this snippet memorable, crowding out the contemporary shorts of trapeze artists, wrestlers, fighting cocks, and the like.

Two days later, Dickson and his assistant copyrighted the film, as a photograph, at the Library of Congress, making this the first identifiable copyrighted film. Oh, Fred Ott, what have you wrought?
Posted by BradWeis at 11:50 AM No comments: