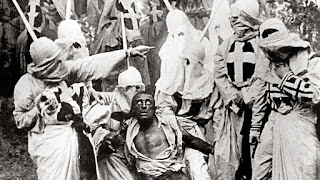 The Birth of a Nation
Dir: D.W. Griffith
Prod: Griffith, Harry Aitken (uncred.)
Scr: Thomas Dixon Jr., from his novel and play The Clansman: An Historical Romance of the Ku Klux Klan; Griffith, and Frank E. Woods
Phot: Billy Bitzer
Premiere: February 8, 1915
Between 125 - 195 min.
It would be a vast impertinence to attempt to measure this film in a few hundred words. Nonetheless.

This is the kind of movie, were it a museum exhibit, you would rush the children past it, shielding their eyes. That this, the first mature American masterpiece of film happens to be a vile piece of racist trash is not news. This film was just as problematic when it as released as it is today – it caused riots and was banned in several cities. It was also insanely popular, earning more money than any film until Gone with the Wind 24 years later, perhaps more than any film ever made. It was among the first films to be screened at the White House (Woodrow Wilson, a progressive, was also a racist). It’s said to have sparked the revival of the Klu Klux Klan, and to have made Louis B. Mayer’s fortune.

It’s America’s first epic, appropriately about one of America’s epic conflicts. The innovative and prolific Griffith, who took seven years to become America’s most accomplished film director, took everything he had learned and wove it into a grand tapestry of techniques subordinated to the idea of telling a long story, populated with many characters – a novelistic approach that mainstream film cozied up to for some time.

Unfortunately, choosing the Southern cause to champion, complete with its depiction of black people as animals, cunning, lustful, malicious, and lazy – portrayed mainly by white men in blackface as a civilization-threatening force to be put down and controlled by white Christian men. (Ostentatiously, and perhaps placed there in exculpatory fashion after the outcry of the initial release, a title card states primly at the beginning of Part II, “This is an historical presentation of the Civil War and Reconstruction, and is not meant to reflect on any race or people of today,” then defensively quotes Wilson, marking him as an endorser of the film, witting or no.)

The story intertwines the fates of two families, North and South (both white of course), and how the Civil War and Reconstruction plays hazard with their loves and fortunes. Radical Republicanism and anyone unwhite person are the interfering enemies. The viewer is forced, as with Reifenstahl’s Trumph of the Will, to put aside the content in order to admire the technique, but only long enough to do so. The full-length live orchestral score, frame tinting, and the compelling pallette of technique made the film compulsively watchable, despite its original three-hour-plus length (Joseph Breil’s love theme for the film, titled “The Perfect Song,” became the theme for another beloved and racist American cultural institution – radio’s Amos ‘n Andy show.) It made the careers of actors such as Lillian Gish, Mae Marsh, Henry B. Walthall, and others.

It would be a relief to say that it’s an antiquated document that outlines prejudices that no longer exist, but recent events speak otherwise. The regressive rise of racism and intolerance is a strong backlash in American culture today. It’s a movie you have to watch – once. The Birth of a Nation helps us remember how close those sentiments are to the surface and how great art can push bad intent. It’s a monstrous masterpiece.

The NFR Project is an attempt to review all the films listed in the National Film Registry, in chronological order. Next time: ‘The Cheat.’