The NFR Project: 'The Gold Rush' 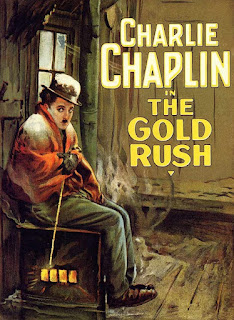 It’s a comedy on an epic scale, but one that was filmed almost entirely in the studio. The highest-grossing silent comedy of all time, it’s the film Chaplin said he was proudest of, but it’s one that he reissued 17 years later with 20 minutes of cuts.

Chaplin’s masterpiece is his most perfect film. All of his subsequent films, from The Circus through Limelight,  have an acidic edge to them. The Gold Rush glows with sentimental light; the pathos of the Little Tramp would not be so pronounced in future.

Charles Chaplin’s personification of the Little Tramp makes him the best-known and most sympathetic clown of all time. His clever mixture of cunning and sentimentality, his cocky nonchalance in the face of threat, and his childlike inventiveness all endear him to us.

Chaplin’s greatest film is set against an epic background. It is the Klondike Gold Rush, and his Little Tramp character is cast as the Lone Prospector. He marches blithely across studio-manufactured snowscapes. He fetches up against a cabin in the middle of a blizzard and finds himself thrown together with a couple of tough guys – Black Larsen and Big Jim McKay. (The Tramp’s scramble to avoid the muzzle of the gun Larsen and McKay fight over is impressively athletic.)

The Tramp and Big Jim wind up stuck together in the cabin, starving to death. Their solution? To eat a shoe, of course, one of the Tramp’s, lovingly basted and served with shoelaces on the side, like spaghetti. A hungry Big Jim hallucinates the Tramp is a chicken, and attempts to kill him. The two are spared by the providential arrival of a bear. That Chaplin can make comic hay out of starvation and murder is testament to his powers.

The two comrades part ways, and the Tramp goes to the nearby boom town. There, you see his character in his habitual state – alienated from the general mass. He is forever on the outside of human society, on the margin, peering in. The pathos with which he stands, back turned to us, contemplating the happy, jostling crowd in a dance hall, is almost unendurable.

He falls for a young dance-hall girl, Georgia, who is blithely unaware of his existence. His pathetic devotion to her finally wins her attention, when he is dragged away by Big Jim to find the cabin and Big Jim’s big gold strike. After a long comic sequence involving the cabin breaking loose and fetching up at the edge of a precipice, the two find their mine. A providential fate then brings our hero and his beloved together.

The film is an implicit critique of capitalism – the Little Tramp succeeds, not through skill or hard work, but through sheer luck. His fate is always in the lap of the gods, and he stumbles forward fortuitously.

There are two versions of the film to choose from – the 1925 original, and the 1942 re-release, losing 20 minutes of running time, with a new score and Chapin’s narration instead of dialogue cards. It’s instructive to watch both, as it provides us with a glimpse of how Chaplin’s comic sensibility evolved over time.

The NFR is one writer’s attempt to review all the films listed in the National Film Registry in chronological order. Next time: ‘Grass’.

Posted by BradWeis at 4:07 PM No comments: