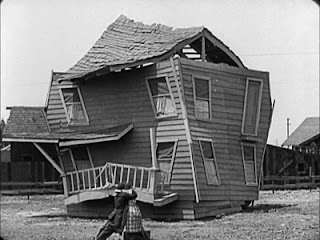 Buster Keaton is not only my favorite silent-era comic, but he’s one of my favorite filmmakers, period. What puts him head and shoulders above more popular contemporaries such as Charlie Chaplin and Harold Lloyd is his unique and comprehensive eye. They perform in front of the camera; Keaton performs with the camera. Chaplin and Lloyd make faces, trade in sentiments; Keaton maintains a stoic impassivity, and inadvertently implements a philosophy.

Keaton was a natural clown. He was born to vaudevillians in 1895 and joined the act when he was 3 years old. The roughhouse comedic acrobatics he learned from his father were the foundation of his unique slapstick style. At the age of 21, he struck out on his own and decided to give the fledgling movies a try.

He apprenticed under, served as sidekick to, and became lifelong friends with, prominent film comedian Roscoe “Fatty” Arbuckle. Through the production of 14 short movie comedies with him over the course of two years, Keaton mastered the basics. By January of 1920, he got an offer from producer Joseph M. Schenk. His own studio, $1,000 a week, 25 percent of the net profits, and creative control. The Keaton Studio was open for business.

His first solo effort, The High Sign, displeased him and was held by him from release for some time. After completing an outside feature-performance project for Metro, The Saphead, Keaton got back to work. The result is his first released, completely original production — One Week.

Keaton was known as “The Great Stone Face,” a persona he developed that stood in stark contrast to the mobile features of Chaplin or the determined grin of Lloyd. Keaton’s frozen-featured equanimity makes him his films’ straight man. With never a raised eyebrow and only rarely a blink, his character absorbs the blows of random fate with a peaceful patience that begins to resemble optimism. Still waters run deep.

Certainly he personally could cope with, and overcome, the vagaries of chaos. He was a gifted mechanic and designer, who knew how to construct big gags and pull them off. Even in this first “real” film of his, it’s evident how developed his visual-spatial sense is. He knows what the camera can see and what it can’t see, and he decides to play with that, which means he ends up playing with the ideas underpinning cinema itself. His aim is purely practical. He wants to make up laugh. But his craftsmanship reveals a profoundly thoughtful sense of humor.

His outlook is cynical; everything that can go wrong will, hilariously, and the humor doesn’t always overcome the downbeat in his films. The world is not hostile to Keaton; it just doesn’t factor him in, and he must get along as best he can on his own. Life rewards and punishes in abundance and at random; social acceptance is arbitrary and fleeting. No wonder Keaton’s wry gloom attracted the attention of “serious” writers of the period from Federico Garcia Lorca to Samuel Beckett.

One Week moves in circles. Wheels within wheels. Buster’s cinematic universe has three ever-larger, intermeshing gears: the individual, the social, and the universal. The natural world stands over all. It is unfathomably complex, but it does operate in accordance with its own (mostly) immutable laws. Buster’s own plans and desires usually succeed, but only when he submits to and works with the larger, natural world. In between, fouling everything up, is the complicating human world — imperfect, blind to subtlety, averse to truth, wrong-headed.

In his later feature films, Buster arrives as a misfit and exits as a hero. He doesn’t change — he’s simply fallen into phase with what’s going on around him, and, like some white-faced Zen monk, manipulates the universe so that it sets him neatly down, unharmed, at the finish line. One Week doesn’t take this tack. It’s a catalog film, a situation dreamed up to provide a (here literal) framework for a series of gags, growing in scope and complexity to a culminating payoff.

The inspiration for One Week came from a 1919 Ford Motor Company documentary short, Home Made: A Story of Ready-Made House Building. The possibilities for what David Robinson called “an accelerating merry-go-round of catastrophes” suggested themselves easily. The title is a play on the structure of the film and refers to Three Weeks, a 1907 libidinous romance novel by Elinor Glyn that was the 50 Shades of Gray of its time.

The film opens with Buster and his new bride (Sybil Seeley) leaving the church. Guests pelt hem with rice and old shoes; Buster stops, stoops, considers a pair, and tucks it practically under his arm.

A car ride sets the plot in motion and serves as a little circular gag. Buster’s rival suitor unaccountably serves as their post-nuptial chauffeur — Keaton refers to him as “the villain” in remembrance, and probably needed to shoehorn him in as his film needed an antagonist. He hands them an envelope telling them they are being given a house and a lot on which to build it. The three characters then execute a jump from car to taxicab to motorcycle and back again, during which Buster gets his rival in Dutch with the cops.

They arrive on site. Someone is dumping crates off a truck. “Here’s your house!” he says. It’s a do-it-yourself house kit! The directions read, “To give your house a snappy appearance put it up according to the numbers on the boxes.” The rival obtains revenge by changing the crate numbers, and the fun begins.

The gags pile up. Buster saws off the beam he’s perched on, taking a tumble. Whole sections of the house are misplaced, or swing dangerously to and fro. When we step back to see the house in its entirety, it is indeed a surrealistic nightmare of misshapen windows, a canted roofline, and mismatching walls. A big, strong mover crushes Buster under the weight of a delivered piano (he later glances back at Buster, who hops in fright).

The trick house, though all “wrong,” is malleable (a porch railing becomes in an instant a ladder). Buster can heave the piano into the house through an easily removed piece of wall, but his attempt to raise it with a block and tackle simply “pulls” the floor above stretchily down, provoking a boomerang effect that catapults his hapless rival in the room above through the roof.

As the dates are torn off the calendar, we move through more mishaps. Buster falls through the roof into the bathroom. (Earlier, his bride drops the soap, and leans out of the tub to retrieve it — the cameraman politely puts his hand over the lens.) He opens a door and steps out into thin air, executing a two-story fall. Keaton was an enthusiastic if untrained stuntman — the fall

Finally, the day of the housewarming comes — Friday the 13th. A storm comes, and it turns out that house is so unstable that strong winds spin it like a top. As the guests are flung around the inside of the house, Buster tries over and over to get back over the threshold. Timing his jump, he leaps into the pirouetting building — and is flung out just as neatly.

The scale of jokes grows bigger and bigger. When the dawn comes, it also turns out that they built their home on the wrong lot and need to move it across the railroad tracks. Of course, the towing job breaks down just as they move into harm’s way. A whistle blows — smoke appears — a train approaches in the background! The two clutch each other and brace for impact — and the camera pans slyly right, showing us the train missing its mark, on an adjacent track. They sigh with relief when BAM! A train barreling the other way smashes the house to flinders.

Now we’ve come full circle, and the house is just a pile of lumber again. Buster hangs a For Sale sign on the debris, and the couple walks away, hand in hand. Keaton would make 16 more shorts and nine feature films. In One Week, he is already on top of his game.

The NFR is one writer’s attempt to review all the films listed in the National Film Registry in chronological order. Next time: ‘Within Our Gates.’

Posted by BradWeis at 4:42 PM No comments: