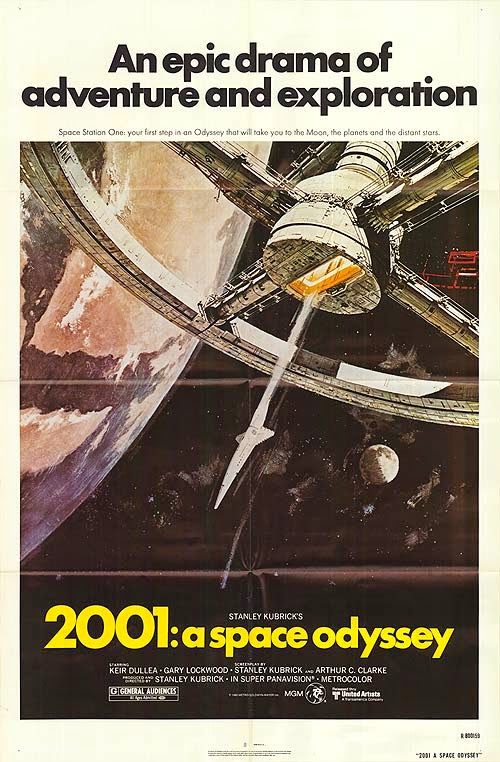 Oh, Dad. You couldn’t have known.

One fine spring Saturday afternoon, Mom told Dad to take me and my sister to the movies. We had already seen “Planet of the Apes” (see Formative Film, Chapter 6, “Chuck Amok,” for details) and “Blackbeard’s Ghost.” So Dad picked “2001: A Space Odyssey.”

It seemed like a safe bet. The film genre of science fiction, at least the kind dealing with outer space, was nicely codified by that time, without surprises. We had grown up on Saturday morning reruns of Flash Gordon (Larry “Buster” Crabbe) and Buck Rogers (Larry “Buster” Crabbe) series. See what I mean? Even the ’50-era technical innovations of George Pal (“Destination Moon,” “The Conquest of Space”) and Ib Melchior (“The Angry Red Planet,” “The Time Travelers”) served tried and true plots. 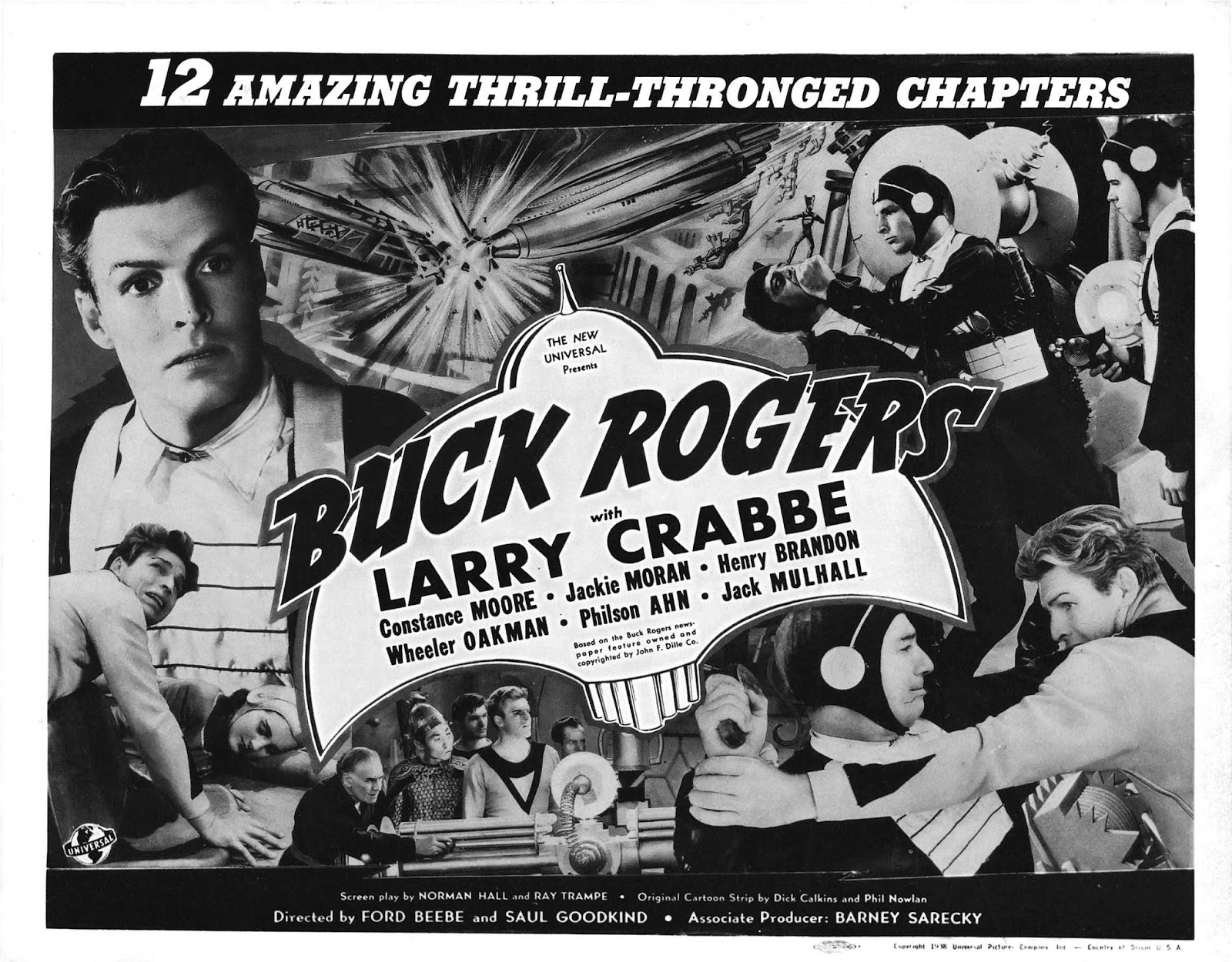 I was on edge anyway – yes, at the age of 7. As a child, I was that deadly combination of neurotically, obsessively thoughtful and fascinated by the world around me, and 1968 is the one year of my life in which I was pretty sure existence as we knew was going to end. Vietnam raged on the TV every night, and the Tet Offensive had gone down. Martin Luther King had just been assassinated. He had saintly status in our home (OK, at least in Mom’s eyes), and his death shocked me. Now vistas of burning cities played on the screen as well. AND we were in the depths of the Cold War, and we had a bomb shelter in our basement to prove it.

I was also an ardent fan of the space program. I wanted so badly to be an astronaut that I scavenged cardboard boxes from behind the strip mall near our home, brought them back and used up all the tape, staples, and glue in the house building rocket ships in the backyard. I saved my money and bought the amazing AMT model company’s Man in Space set of U.S. rockets, the Revell brand standalone Saturn V (with lunar module!), as well as Aurora’s 2001: A Space Odyssey Moon Bus! I drank nothing but Tang; I ate naught but Space Food Sticks. I wrote mash notes to NASA. 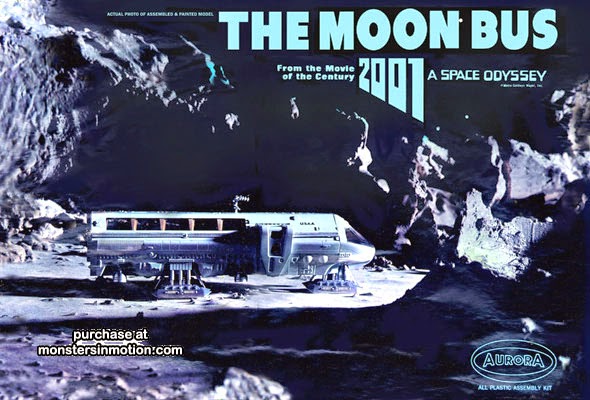 This was a time when America’s Apollo program was on hold. Grissom, Chaffee, and White died on the launch pad a year before; it took 20 months before the U.S. sent up another manned space flight.

So – my expectations were high when we at in the back of our cozy local theater. Yikes.

First of all, what’s all this scary vocalizing in darkness? (Ligeti, of course, being Kubrick’s idea of good road-show overture music.) Then the amazing blast of horns, the cascade of Strauss, the pomposity of the “Also sprach Zarathrustra” quote and Nietzschean reference that I wouldn’t get until college . . .

OK, what are we doing in the African veldt? I had seen dioramas in the old Museum of Natural History, so I knew basically what was happening (THE DAWN OF MAN title helped, too). Monkeys? A big black giant rectangle? Bones? Murder?

Then the most insane match cut in film history.

After this, I was lost in the immensity of scale, the crisp detail of the Unsworth's camerawork (it holds up today), and an insanely ballsy ability to tell the story just through images, just swept me along. I bought into this universe in front of me because Kubrick had imagined it in painstaking detail.

The picture crawled by, so deliberate, holding so many cards to its chest. Where is Dr. Floyd going? What in the hell is the big black thing doing on the moon? DAMN, that thing is loud!\

The perfection of the Jupiter Mission section drew me back in. Terrified by the leisurely, sadistic horrorshow pacing, cutting, and soundtrack, I was back in thrall.

THEN you kill HAL, which I get but he was by far the most sympathetic character in the movie. Then . . .

I get it now, years later, after much therapy. I get the whole trippy-ass, cutting-edge, weirdness of Dave Bowman’s trip through the Star Gate sequence. Long before Laserium, and without the benefit of drugs, I came as close to tripping as I would for well over a decade. And it was far more intense and disturbing than any acid trip I ever took.

But I was traumatized for life. Even though I was just a kid, I got the sense that whatever it was (God? Super-advanced space nannies?) that was pulling this human being through time and space, addling his mind, crushing the sanity out of him, was contemptuous of him. I felt baffled and abused myself.

[TANGENT: The Star Gate sequence won Kubrick his only Oscar, for Best Visual Effects. One of his team of four special effect supervisors, Douglas Trumbull, developed the slit-scan multiple-exposure method that made the sequence so distinctive. Harry Marks picked up the technique and used it to design the memorable opening graphics for ABC’s Movie of the Week. HA! See what kinds of info you can cram in without an editor’s wisdom?]

Then we recycle Dave, turn him into a big giant fetus, which then stares at us. The End. Lights up. Did you have fun, kids?

We walked out, and my dad immediately lit up a Benson & Hedges. We stood there.

“What in the hell was all that about?” Dad wondered aloud. I shrugged. My little sister kind of stared off into the middle distance. She was three. God knows how it affected her in the long run.

At home later during dinner we tried to describe it to Mom. We had a lot of fun trying to figure out what it meant, or what had happened, or if anything had after a certain point.

The film did open to mixed critical and popular response. However, in those days movies went into general release for a much longer period; box-office results were not tracked so assiduously that a poor-performing film cold be yanked and replaced in days. (There were different distribution deals in place then as well, and hey, film was ON FILM, in bulky, heavy cans that had to be whisked around the country – decades prior to the advent of overnight delivery service networks, and now the dubious exigencies of the DCP Age.) “2001: A Space Odyssey” wound up a hit, the biggest of that year . . . something that could not have developed in like fashion today.

Looking at the film now, Kubrick’s misanthropy seems even more pronounced, as my perception of it ratchets up with every film of his I see. It’s there as we see murder as an evolutionary step forward. It’s there when we meet William Sylvester as Dr. Floyd, the putative protagonist of the film’s second sequence. Sent to puzzle out the mystery of a monolith discovered buried on the Moon, Floyd is no cleft-chinned astro-stud, nor a wizened scientific wise man, but a polite, insincere, bland bureaucrat.

It’s there when we hear Dr. Floyd casually state to lunar staff that “ . . .of course you know that the Council has requested that formal security oaths are to be obtained in writing from everyone who had any knowledge of this event.” In comparison to “Dr. Strangelove”’s closing Armageddon, “2001” posits a continuing tension between countries, and the need for secrecy and loyalty oaths. The future is fascistic.

And there when mankind’s greatest child born of intellect, HAL, grows up to be an insane, homicidal maniac.

Maybe Dave Bowman had to go through the Star Gate to be cleansed of the imperfections that lead humanity around in incessant murderous dance. Or some such nonsense. Countless books, articles, and papers dissect this film further; my critical purpose doesn't take me far enough for that.

Kubrick took us as far as he could. I later pored through Clarke’s novelization, and eagerly went to the half-decent film sequel years later. Like Talmudic law, a sufficient theory of causation and context can be pieced together from these evidentiary leavings. However, by now it doesn’t have to make sense to me. Its crazy, uncompromising grandeur is sufficient unto itself.

NEXT TIME: “Butch Cassidy and the Sundance Kid”
Posted by BradWeis at 12:22 PM No comments: