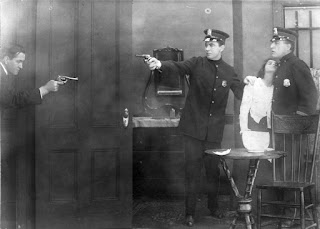 Traffic in Souls aka While New York Sleeps
Dir: George Loane Tucker
Prod: Walter MacNamara, (uncred) Jack Cohn
Scr: Tucker, MacNamara
Phot: Henry Alder Leach
Premiere: Nov. 24, 1913
97 min.
Suddenly, in 1913, it seems like the American film industry turns the corner in terms of being able to tell a story. “Traffic in Souls” is crucial in many ways. First, it made Universal Pictures possible, earning the studio $400,000 from a budget of $7,500. It’s the first “sexploitation” film, a torn-from-the-headlines cautionary tale about what was called – white slavery.

What was white slavery? It represents a tradition that Caucasian women are favored sexually by men of other races and must be forced into sexual bondage under them, and has been peddled down the centuries by racists against immigrant populations, especially Jewish, Asian, and Italian men.

The most popular modern form of the stereotype erupted in 1909, when it took the form a nationwide sweep of books and pamphlets condemning the practice. People everywhere imagined sinister networks of “foreign devils” who would kidnap toothsome young maidens, drug them, and prostitute them, keeping them imprisoned in the seamy hellholes of Manhattan. The Mann Act, forbidding the transporting of women across state lines for “immoral purposes,” was generated by this spurious, hysterical concern.

It’s clearly a projection of male anxiety about “losing” women to male rivals outside the clan (and Klan) group, as well perhaps a wish that one could act with such ruthless, decadent . . . stimulating . . . disregard for the sanctity of womanhood (remember that?) as one thinks those dirty swine were doing. There's also the still-strong distrust of "the big city." America was primarily rural, and the city was thought of as a sinful place, a locale where values were relative and life was cheap.

All this appprehensive energy gets pured into the classic American “based-on-a-true-story” feature film. The premise is taken from the stage melodramas of the 19th century – the guilty are punished, the innocent are redeemed – with the thrilling forbidden hot-topic sexiness thrown in! It revels in the details of the horrible things it is denouncing, then gets to condemn it and give the beat down to all the baddies involved, without showing any skin or sexual activity.

The plot triangulates on three speculative sources of white slaves: girls from the country, immigrants, and dumb clucks. Each type is shut in a cold-water flat bossed by pimps and madams, fed only whippings, drugs, and, evidently, takeout. An example of each is brought to peril in the hands of a covert, complex criminal empire controlled by a criminal mastermind who uses sophisticated technology and masquerades as the head of an ‘International Purity and Reform League.’ It rings oddly like a precursor to Fritz Lang’s 1919-1920 serial adventure film “The Spiders.” (Monopolies had been getting crushed by President Theodore Roosevelt the decade prior – the editorial-cartoon image of the Monopoly as far-reaching Octopus was ripe for transposing to a criminal identification in a film.)

A few of the outdoor scenes are shot on the fly in a barely controlled crowd, on location. The actors are mixed in freely among the spectators, some of whom gape, gawp, wave, and leer at the camera – behavior that would normally spoil a shot. Studios were on the verge of creating versatile areas and sets. Electrical lighting was getting stronger and at the same time less harsh. But by immersing itself in everyday reality, the exaggerated narrative makes a strong build for plausibility. It’s happening in an unstaged space; isn’t it a documentary, then?

The heroine, a saintly salesgirl who cares for her aged father, a tinkerer in wheelchair and skullcap. When her little sister is drugged (never go with a strange man to an ice cream parlor!) and taken away to become a professional ho-lady, the heroine is of course fired. Luckily, her boyfriend is brave Officer Burke. The two of them, using recording technology her dotty old pater has assembled, catch the bad guys, save the sister, and dispatch in the chief pimp in a running gun battle on the New York rooftops.

The film still works. There are sophisticated parallel story lines, cutting for contrast as well as for pace, and relaxed characterizations. Film is falling into itself, finding its strengths.

When the hypocritical mastermind is exposed and released on bail, a crowd assails him, and he pushes through the teeming mass ringed by cops. The city’s outrage boils around him like a scene from Dante’s “Inferno.” His daughter loses her engagement to a high-society beau; what’s worse, his wife dies of shame.

The NFR Project is an attempt to review all the films listed in the National Film Registry, in chronological order. Next time: William S. Hart becomes the first great cowboy hero in ‘The Bargain.’
Posted by BradWeis at 4:06 PM No comments: 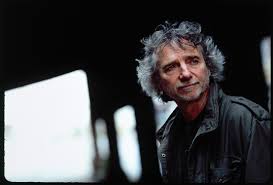 This is an expanded version of my Obit Patrol post on his passing.

Director and Oscar-winning screenwriter -- via the New York Times. An excellent writer, and a filmmaker who didn't mind trying all the genres, or working with no budget. He wrote standout screenplays, such as the under-rated "Silent Partner" and "White Dog"; he made horror movies, spring-break comedies, even the "Karate Kid" ripoff "The Little Dragons." But he made really good thrillers, such as "The Bedroom Window" and "The Hand That Rocks the Cradle." When he got the chance to make a noir with style, he gave us "L.A. Confidential," which both revels in the style of the period and shatters its conventions at the same time. "Wonder Boys" is another gem, a grown-up stoner comedy. "8 Mile" is compelling, and his last big project, "Too Big to Fail," took a tough complex story and made it understandable.

My admiration for him lies in his love for the movies. He loved them so much that he took on all kinds of hackery projects and learned how to make them work. He loves the old tricks and twists of Golden Age cinema, and in his films he figures out how they work and then he starts to bend them to his own purposes. His shots are there to move things along. He does not waste your time. He gets good work out of people.

Unfortunately, it seems he went into a quick physical decline in the past few year. Thankfully, he left behind some good stuff to remember him by. 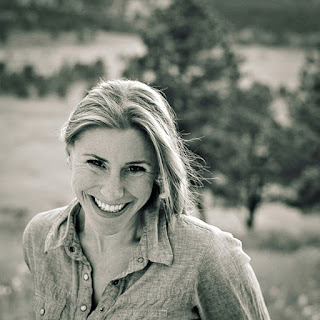 Been quite busy, but here's a link to a profile I wrote of filmmaker, photographer, and journalist Dana Romanoff in the new issue of Boulder magazine. A great  interview with a real pro, who knows how to combine advocacy with strong narrative and vivid human interest.
Posted by BradWeis at 8:55 AM No comments: