The NFR Project #7: 'The Corbett-Fitzsimmons Fight' 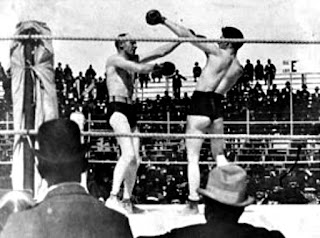 It doesn’t seem crazy now, in our sports-obsessed nation, that the movie of an athletic event would ever have been something people wanted to see. In 1897, there was no guarantee that anyone would pay money to see an hour-and-a-half-long film of a boxing match, especially one the outcome of which was already known.

That’s precisely what happened, though. The contest between heavyweight champion James J. “Gentleman Jim” Corbett and Bob Fitzsimmons in Carson City, Nevada on March 17, 1897 was processed, copied, and shown by 11 touring companies across the country, complete with live speakers who contributed commentary throughout the bout (history’s first play-by-play men). By all accounts, it made lots of money, starting a new subgenre of sports actualities that remained popular with the public as special events, never merging into the mainstream, disappearing when television took over the function.

The director Enoch Rector was a former Edison employee who made the film using the first big technological breakthrough in film, the Latham Loop. This loop, invented in fact by Eugene Luste and developed by him and W.K.L. Dickson while in Woodville Latham’s employ. The Loop enabled both the movie camera and projector to maintain enough slack to keep the celluloid film from tearing while rapidly ratcheting from frame to frame. Longer films could at last be made and shown.

Thinking big, Rector shot with a large-format 62mm film stock to capture the action (he tried to cut the ring down, too, but the ref stopped him). That makes Corbett-Fitzsimmons the world’s first widescreen film as well. He brought 48,000 feet with him, exposing 11,000. The result is 14 rounds resulting in a knockdown punch to Corbett’s gut by Fitzsimmons.

O A.J. Liebling, that you were here to enlighten us as to the significance of what we are seeing! He and fellow scholars of what was once termed the Sweet Science could interpret these stuttering scraps of film, not me. Thank goodness for Jean A. Le Roy of New York City, who sometime in the 1980s transferred the only known fragments onto 335mm via a specially designed optical printer.

Cinematically, there’s not much to write home about. The camera is bolted stolidly in place, and the technology is so new that neither the boxers nor the onlookers seem aware of the camera at all – a naiveté we associate now only with Amazon tribespeople. The two pale combatants – Fitzsimmons balding, slouched back in stance, hands held low, and Corbett, dark-haired and using a more classic technique, with his boxing trunks pulled high up on his butt – circle, dance, strike, clinch, repeat with variation, a hostile tango.

Whatever fascinated us about boxing waned. Shadier than ever, it resembles the sketchy, carnival-challenge demeanor of other, now more popular, blood sports such as pro wrestling and the MMA. That Corbett’s sobriquet was Gentleman Jim reminds us that boxing’s practitioners once enjoyed universal adulation, their might literally gentling their condition. They had an air of savage nobility about them.

The NFR Project is an attempt to review all the films listed in the National Film Register, in chronological order. Next time: 'Westinghouse Works, 1904.'
Posted by BradWeis at 12:26 PM No comments: 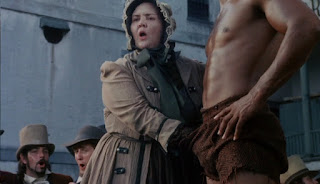 There is no upside to this story. This remains not a guilty pleasure, but a guilty sorrow. We were underage, and wanted to see sex and violence; this movie was rated R. We easily circumvented the MPA’s ratings restrictions by going to the drive-in.

Jesus H. What a nightmare.

This film shows how dangerous it is, as a creative person, to have your heart in the right place. The mixed motives behind the project push it in a netherworld that is half empty-headed sentiment, half sniggering exploitation. Can you have your thematic cake and eat it too? Not if you are Mandingo.

It doesn’t serve to disembowel the movie in great detail. That would be as easy as skeet shooting. The film is based on the 1957 novel of the same name by Kyle Onstott. This best-selling antebellum potboiler focused on the breeding of slaves; not surprising, as Onstott was a dog breeder who mused in interviews about the efficacy of selective breeding for humans. The 1961 Broadway adaptation (!) starred a young Dennis Hopper.

By the time the film was made, the first wave of blaxploitation films had swept the country; I’m sure it seemed to the filmmakers that the blatantly racist, sexist, exploitative story could somehow be turned inside-out so that it voiced the opposite sentiments, making it a kind of subversive liberal screed. 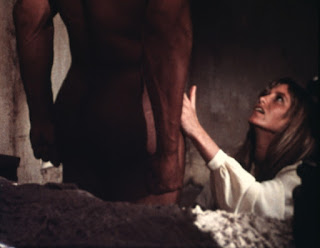 It didn’t work. Director Fleischer was nagged into doing it by De Laurentiis; James Mason needed to pay alimony. Ken Norton can’t act, and Susan George can’t stop. Plot lines snap, characters wander off. The most enlightened thoughts are placed into the mouths of the most grotesque characters, and the nastiest commonplaces inhabit the mouths of the supposed Southern aristocracy. Instead of stirring admiration for black struggle and contempt for white oppression in the viewer, one wishes that the whole kit and caboodle would explode, catch fire, and fall off a cliff. (Fortunately, the genre rules of Gothic melodrama dictate that as many principals are dead by final fadeout as is practicable.)

Read what producer Ralph Serpe had to say at the time:

“We're faithful to the story of the book but not the spirit. . . It's really a story of love. I hated that ending in the book where the guy boils the slave down and pours the soup over his wife's grave. I mean, we have the slave boiled but we cut out the part where he pours the soup on his grave. He just... pull away. And we know that tomorrow there's going to be a lot of trouble. It's really a very beautiful ending.” Yeah.

Let’s see, we also have murder, rape, adultery, miscegenation, alcoholism, a miscarriage, torture, a hanging, incest, infanticide, and extremely poor grammar. The temptation to show lots of skin of both colors being whipped, beaten, or sexually assaulted, proves unavoidable. As with most fits of movie self-righteousness, there’s as much spotlighting of the sins to be condemned as possible. And with this inhibition overcome, the usual stereotypes fall into silent place behind the action.

Sex between a white man and a black woman is beautiful and tender, and between and black man and a white woman is great, but wrong and forbidden. A woman’s sexuality is dangerous when unleashed, and a black man’s rage brings death to all, including a pitchfork to the abdomen whilst thrust into a cauldron full of boiling water. Mandingo ends up unconsciously reinforcing the crap it purports to oppose.

My reaction was disappointment. We were sneaking in to our first bona fide adult film, but the results weren’t titillating. The movie was a depressing, murky mess. When you’re 15 and a film makes you want to NOT have sex, that’s a pretty stellar accomplishment.

Ultimately, Mandingo was the first evidence for me that despicable films could and were being made. Not merely boring or incompetent ones, but ones who didn’t care what kind of shabby take on humanity they presented, as long as they had enough footage to satisfy the customer’s desire for a little surrogate sex, violence, and in this case racism. Films could make things worse. 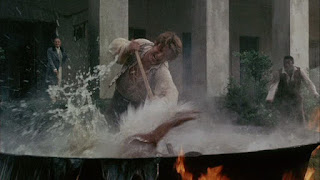 Posted by BradWeis at 9:00 AM No comments: