The NFR Project: 'The Sinking of the Lusitania' 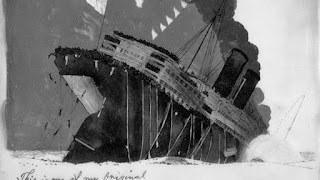 On May 7, 1915, the British passenger ocean liner Lusitania was struck by a torpedo launched by a German U-boat and sank off the Irish coast. Of its 1,962 passengers and crew, only 764 survived. This traumatic event propelled the United States into World War I, and served as a benchmark of outrage that motivated everyone from statesmen to soldiers to go Over There.

In years since, the incident has become more ambiguous. The construction of the ship in 1904 was financed by the British Admiralty, it was given powerful engines and the capacity to be converted to war use. The British government has been faulted by several historians for allowing the shipment of a substantial amount of munitions— 4,200 crates of rifle ammunition, 51 tons of shrapnel shells, and more — in the Lusitania’s hold, which made it a legitimate target in German eyes caused a second explosion that doomed the ship. It is asserted by a few that that the British government connived to see the Lusitania sunk, precisely to lure the U.S. into the war.

But at the time, it was a genuine shock. It colored a Preparedness militancy movement that was encouraged by the popular press. It swayed the American public, which went from a majority for neutrality in 1914 to one for declaring war only three years later, on April 6, 1917. American idealism was engaged. This was the war to end all wars, which would make the world safe for democracy.

It touched people, one of whom as the cartoonist and pioneer animator Winsor McCay. He was already well-known as the creator of iconic characters such as “Little Nemo in Slumberland” and “Gertie the Dinosaur.” He, with his assistants John Fitzsimmons and Apthorp ‘Ap’ Adams began the laborious hand-work of drawing and photographing the 25,000 images that make up this 12-minute narrative, advertised as “Winsor McCay’s penpicture of the blackest crime of all history”.

As the first dramatic animated film, it’s a hauntingly sublime account of the facts as they were known at the time. Simultaneously, it’s inevitably a piece of propaganda, “a historical record of the crime that shocked Humanity.”

As we have seen before in McCay’s films, he is very open and inclusive about his process, the sheer magnitude of which at the least makes it memorable. The painstaking work of drawing one animation cel after another must have been excruciating. (For some shots, McCay figured out how to make a set of repeated-cycle background drawings against which he would draw objects in movement.) We see McCay at his desk, as a “Mr. Beach” gives the details of the sinking. We see his office, with stacks of paper and six assistants (none of whom are Fitzsimmons or Adams). McCay’s ambitious attempt to render full animation as a kind of documentary is treated almost as a stunt or magic trick.

The film proper begins, and we see the Lusitania’s four funnels and the distinctive, rakish set to the bow. It steams past the Statue of Liberty as a curtain is drawn across the scene.

A title reads: “Germany, which had already benumbed the world with its wholesale killing, then sent its instrument of crime to perform a more treacherous and cowardly offense.” Against ironically beautiful renderings of sea and sky, the submarine looms into view had-on, then we see it surface in profile. It is so well-drafted it almost looks rotoscoped

We watch the intersecting trajectories of the liner and the submarine. Two fish do a double take, then swim out of the way as the torpedo approaches the ship’s hull. We see the explosion, the scattering of debris, gouts of smoke churning up into the sky. It’s all very compelling. The smoke finally obscures the screen . . .

Then we are given a list of “men of world wide prominence” who were killed – writer Elbert Hubbard, playwright Charles Klein, tycoon Alfred G. Vanderbuilt, producer Charles Frohman. The smoke lifts again . . . “Germany, once a great and powerful nation, had done a dastardly deed in a dastardly way.” A woman in the waves, as in the background overloaded lifeboats descend. A swamped boat floats into view.

The “second torpedo” explosion is shown, making the Germans’ actions seem all more despicable. The ship heels over to starboard and begins to sink by the bow. Suddenly, hair-raisingly we can see small figures leaping, falling into the water, and it’s visceral like 9/11, and I can smell what Ground Zero smelled like a week after that attack. Then it becomes easier to imagine the feelings that prompted McCay to make this picture.

The morbid fascination that disasters inspire is at work here, in the masochistic fascination with the agonies of death and destruction, the insistence on martyrhood, the only way to make sense of it. “No warning was given – no mercy was shown,” says the title. “The babe that clung to his mother’s breast cried out to the world – TO AVENGE the most violent cruelty that was ever perpetrated upon an unsuspecting and innocent people.”

Throughout, McCay’s style is dark and severe. The looming hulls, the smoke that has a life of its own, everything in the film has a sinister cast, miles away from McCay’s usual sunny fantasies. Just to drive the message home, we see finally a mother and baby sink to their deaths beneath the waves. The title blares, “The man who fired the shot was decorated for it by the Kaiser! – AND YET THEY TELL US NOT TO HATE THE HUN.”

Unfortunately, it took McCay more than three years to complete the 12-minute project. The U.S. was well into the war by the time the film debuted on July 20, 1918; the conflict would end on November 11.

Historical hindsight is what it is; emotional arguments are the strongest. Whatever else it was, the sinking of the Lusitania was a tragedy. In terms of film, it pushed the boundaries of what could be done, and what could be pictured, outward. In the words of McCay biographer John Canemaker, “. . . the film was a milestone in the demonstration of the alternatives available to the creative animation filmmaker.”

Posted by BradWeis at 4:25 PM No comments: 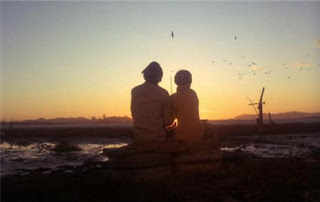 If you are lucky, you see a film that speaks to you, and if you are really lucky, you find one that knocks you out and rules your life for a time -- in a good way. It’s usually something you see when you’re a kid or a teen, and it stays with you for a long time. You see it years later, and even if it no longer strikes you as it did, it still pulls at you.

That’s what Harold and Maude is for me. When I first saw it, I was a 16-year-old going crazy in the suburbs, tired of deadly normalcy and longing to get out into the hopefully much more interesting real world. Harold and Maude gave our circle of friends a rebellious and catchy gospel to live by for a time, a dark optimism that floated us through the steaming wad of disillusion the looming adult world had to offer. It questions everything but the sheer anarchic rush of being alive.

This is a film you will either adore or despise, and I have enraged my share of unwary recomendees with exposure to its fuzzy, feel-good platitudes. The movie bombed when it premiered in 1971. It took repeat showings at repertory film houses such as the Ogden in Denver, where I first saw it, to give the movie cult status and earn it a little critical reappraisal.

If you haven’t seen the movie, it’s a parable about a wealthy, morose, mother-dominated young man, Harold (Bud Cort at his pale, staring best), who attends funerals for fun and stages fake suicide attempts for attention. At one burial he runs into the blithe, sassy, rebellious 79-year-old Maude (Ruth Gordon in a defining role) who charms him and opens him up to the possibilities of a carefree, affirming existence. It’s a modern screwball comedy, and Maude is the manic pixie girl who also happens to be a septuagenarian.

Colin Higgins’ divine script is perfectly paced, with each honed scene following the next like pearls on a string. Director Hal Ashby deadpans the film’s gags, trusting the blackly humorous material and never straining for effect. The result is clownshow anarchism, a nose-thumbing that just skirts pretentiousness. It’s quite a feat. The scenes of Harold and Maude’s fast-blossoming relationship (the move plays out over the course of a week) are punctuated by interludes of Harold’s unhappy interactions with blind, computer-selected dates and authority figures. The doctor, the priest, the military man -- all the normative examples of mature male identity in this film are mad, bad, and dangerous to know. Harold must reject the fatuous, pale patriarchy in order to step out from under the sway of death.

Harold and Maude documents a psychic pivot point in the history of American culture. Maude, a long-time political activist and protester, has seen the worst of the 20th century (a beautifully subtle, fleeting reveal shows us that she is a Holocaust survivor) and is now a hedonist. The political engagement of the ‘60s is turning into the self-obsession of the Me Decade, and Maude is its pioneer figure. “If you want to sing out, sing out,” sings Cat Stevens -- the perfect enlightenment-oriented pop composer of his time --  on his soundtrack to the film; “Ah ah ah, it’s easy.” “Don’t be shy, just let your feelings roll on by . . .” These were magic words for us, and they swept us up. They cheered us up, they freed us up.

At the time I screened it was the midst of the ‘70s, wall-to-wall cynicism and faded denim. The hippies were defeated, and Nixon was gone. Vietnam was over. We were exhausted. The search for meaning turned even further inward. Harold and Maude was a cultural signpost.

We had already exposed ourselves to dark, deliberately shocking countercultural comedies such as Philippe de Broca’s King of Hearts (1966), Joseph McGrath’s The Magic Christian (1969), Carl Reiner’s Where’s Poppa? (1970), and Alan Arkin’s Little Murders (1971), but Harold and Maude had a sense of affirmation about it that made it special. In rewatching it today, I harbor as much suspicion of Maude’s narcissism as I do her foes’ obtuseness. Still, after I watch I am a little light-hearted (and –headed) again.

Formative Film is an autobiography in movies. Next up: I rationalize being a Woody Allen fan while reviewing Love and Death (1975).
Posted by BradWeis at 11:30 AM No comments: