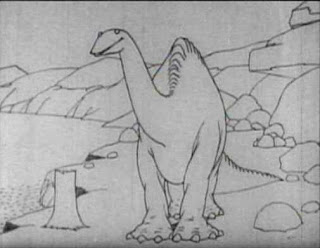 Winsor McCay wasn’t the first film animator, but he was the first great one. He moved with ease from illustration to cartooning to moviemaking, setting aesthetic and technical standards all along the way.

He rode the wave of popularity of the first-generation newspaper “funnies,” and his Little Nemo in Slumberland was proto-surreal, a wildly imaginative comic strip that still marks an apex of artistry. His work seemed destined to be adapted for film, despite its patent impossibilities. Edwin S. Porter had directed a live-action adaptation of McCay’s Dreamof a Rarebit Fiend in 1906.

Meanwhile, animated film had commenced in the hands of early practitioners such as J. Stuart Blackton and Emile Cohl. In 1911, McCayproduced some animated footage of his LittleNemo characters and used in conjunction with his vaudeville act – a logical extension of his early “chalk talks,” in which he would sketch and perform live on stage.

Narration had been done with magic-lantern shows for decades before, some with moving parts that prefigured full animation, but McCay was the first to unite separate mediums, making to-dimensional creatures that he could “play” with in person. McCay’s next animated short, How a Mosquito Operates, was derided for trickery, with viewers claiming that McCay traced or manipulated a dummy to achieve his lifelike drawing effect. McCay then determined to animate something next that could not have been photographed.

Enter the dinosaur. Although they had been discussed in popular culture for decades, speculative visuals of them didn’t take off until the turn of the 20th century, as museums began to display their skeletons and artists began to try to imagine what they looked like. The American Museum of Natural History’s “brontosaurus” skeleton, installed in 1905, inspired McCay. He drew 10,000 images to bring Gertie to life for approximately seven minutes.

As with Little Nemo, McCay crafted the Gertie footage as material to be incorporated into his vaudeville act. The simple but charming scene shows us an somewhat anthropomorphized, roly-poly, sassy, childish and playful creature who responds to commands, gets distracted, misbehaves, and finally pulls its creator onto the screen for a ride. The smooth jump between the real and unreal will come back again and again in films from Sherlock Jr. to the Purple Rose of Cairo.

Unfortunately for McCay, he had a contract with newspaper tycoon William Randolph Hearst, who didn’t like McCay’s theatrical freelancing. Thwarted from performing, McCay shot eight minutes of live framing footage for Gertie, contextualizing the creation of the dinosaur as a bet McCay has with other animators that he can do it (a bit lifted from the earlier Nemo short).

While creating Gertie, McCay coined many foundational animation techniques. He used registration marks to keep the frame stable; he repeated sequences as needed to save labor, a process known as “looping”; and he invented key-framing, in which an animator draws the significant points and poses of action in a sequence, and then “in-betweens” the intervening drawings to bridge those vital points.

The most significant advance here of course is that an animated character is invested with personality. With that, it becomes an entity with which the audience can identify, that can bear the weight of a narrative.

The NFR Project is an attempt to review all the films listed in the National Film Registry, in chronological order. Next time: In the Land of the Head Hunters.’