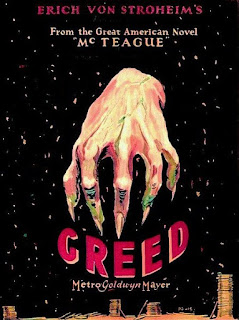 Greed is a grim, glorious, mutilated masterpiece. It’s the prime example of the story of the visionary director in conflict with his studio. Its stark realism and dry cynicism had never been seen before in film. Now, even in its truncated and restored version, it’s possible to grasp the greatness of von Stroheim’s seamy epic.

The movie is based on the 1899 novel McTeague by Frank Norris. In it, a young miner becomes an apprentice to a dentist, learns the trade, and sets himself up in practice in San Francisco. He falls for Trina, the shy girlfriend of his best buddy Marcus. Marcus gives her up, McTeague and Trina marry, and all is well until Trina suddenly wins a $5,000 lottery. Now Marcus is jealous. He blows the whistle on the unlicensed McTeague, who must give up dentistry. He and Trina slide into poverty, but she refuses to part with the $5,000 in gold coins. Finally, McTeague beats her to death and takes it.

McTeague goes on the run, and Marcus joins the posse tracking him down. In Death Valley Marcus catches up to McTeague. They fight, and McTeague kills Marcus. But wait – Marcus has handcuffed himself to McTeague who is now trapped, waterless, lashed to a dead man.

Stroheim thought of Norris’s novel as akin to a Greek tragedy. Stroheim gives us his low-down on the squalid lives of the lower classes of America. The principal characters, despite some evidence of the good in them, are all dragged down by their basest impulses. The result is a stark and depressing film, the opposite of the escapist fare most movies of the day provided.

Stroheim was a well-respected and profitable director, but was already notorious for his condescending unpleasantness, as well as his perfectionist obsession with every detail (the film was shot entirely on location, a rarity for the time), and his tendency to blow his budgets and shooting schedule. Eventually, his defiant and dictatorial ways lost him work as a director, though he would continue with a healthy career as a character actor.

The NFR is one writer’s attempt to review all the films listed in the National Film Registry in chronological order. Next time: John Ford’s The Iron Horse.

Posted by BradWeis at 4:30 PM No comments: