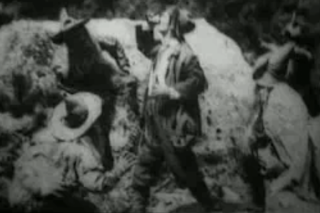 Now, for the first time in the National Film Registry, we get instead of a sequence a story. Or pieces thereof.

“Rip Van Winkle” represents a lot more than just this advance. It is the transmission of an American secular myth and it is a record of an enduring theatrical achievement. The immensely popular film succeeds because it appeals to our fantasy concepts of America, and our desire to see a prestigious performance preserved, albeit in silence.

The 1820 story by Washington Irving is an invented fable (link to original story here, courtesy Bartleby.com) -- part science fiction, part ghost story, part henpecked husband’s fantasy. Rip, a ne’er-do-well but happy, well-meaning and harmless villager in the American colonies is chased out of the house by his harridan wife. He goes hunting in the Catskills, and runs across a little man carrying a large keg. Rip takes up the burden and goes with the man, finding himself in a hollow where Henry Hudson and the souls of his doomed men (in June, 1611, the explorer’s crew mutinied and set him adrift with his son and six faithful crewmen in the bay later named for him) quaffed ale and bowled ninepins, generating flashes of lightning and peals of thunder to the valleys below.

Rip drinks, succumbs, and wakes up 20 years later. His hair is gray, his rifle has rusted away, and his dog is long gone. He limps back to the village to find that 20 years have passed. America is independent, and so is Rip – his wife died when “she broke a blood-vessel in a fit of passion at a New-England peddler.” Time travel? The passive vengeance of surviving a difficult spouse? Hmmm.

Actor Joseph Jefferson adapted the story and, beginning in 1865, played Rip for almost 40 years, becoming the nation’s most recognized and honored thespian in the doing. A read of the script shows the essential story encased in an outer plot of melodrama – Rip’s unscrupulous neighbor marries his shrewish wife after Rip’s supposed death, and treats her so badly that she repents and only wishes to have Rip back again. There is some to-do with Rip’s property being valuable as well, in order to assure him and his reconciled spouse with a comfortable living thereafter.

It wasn’t surprising that director William K.L. Dickson sought out Jefferson for a chance to make and sell snippets of “Rip Van Winkle” for his new company, Biograph, formed after his breakaway from Edison.

Conveniently, the eight 45-foot, 30-second sequences were produced so that the consumer could splice them together in whatever order he or she chose – an act of empowerment that could have resonance in today’s world of edit-it-yourself capabilities. (In 1903, Biograph finally edited the sequences together in proper order and issued as one “full-length” film.)

The eight static shots were filmed at Jefferson’s Buzzards Bay, Massachusetts estate. The pantomimed sequences are “Rip’s Toast,” “Rip Meets the Dwarf,” “Rip and the Dwarf,” “Rip Leaving Sleepy Hollow,” “Rip’s Toast to Hudson and Crew,” “Rip’s Twenty Years’ Sleep” “Awakening of Rip” and “Rip Passing Over Hill.” The desultory setting, a rock and some trees, is put to proscenic work.

Jefferson looks sufficiently rustic here, radiating a cheerful presence. It would be useful to hear his voice as well – and here you can, as Jefferson recorded a passage from the last act of the play here:

Each reel plays out for its entire length, even when during the sixth sequence the action ends and one of the “dwarves” rises from behind a rock and sweatily whips off his pointed hat and massive wig and beard. Evidently, it wasn’t considered a bad enough slip to warrant another take.

It’s confounding now to think of the impact it had. Back then, there was one narrative about America, the official one, crowded with myths and semi-myths such as Paul Bunyan, Johnny Appleseed, and a Christ-like Custer. Everyone knew the story, knew of the actor, and could hook into it immediately. Magically, great moments were captured and preserved, to be viewed over and over and ground into the collective unconscious. Rip and the dwarves will always clamber over the crags above Sleepy Hollow.
Posted by BradWeis at 1:25 PM No comments: