The NFR Project: 'Exploits of Elaine' develops the movie serial 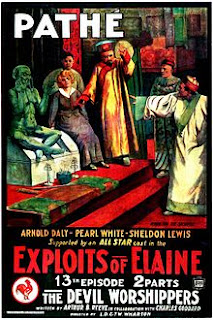 We’ve met Pearl White before, in our entry on The Perils of Pauline, which had been released only nine months earlier than Elaine. The serial form had started in America only two years earlier, with the simply declarative What Happened to Mary. But it was White who caught the public’s fancy, and this series was meant to capitalize on her sudden fame. She was spunky, she was funny, and she had grit, all qualities audiences wanted in a heroine.

The Exploits of Elaine

Elaine is an improvement on Pauline, for several reasons. First, there is an actual cliffhanger at the end of each episode (each Pauline chapter was self-contained); second, it makes a bit more of an effort to make sense. The plot is based on work by Arthur B. Reeve, who created an American version of Sherlock Holmes — Craig Kennedy, Scientific Detective. 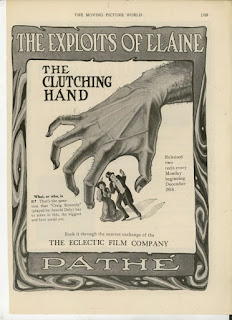 Elaine, with Kennedy’s ingenious assistance is searching for the man who killed her father. The entire serial is intact, and portions of it are easy to find online. The action is hot and heavy — in one episode, she is shot up with drugs, hypnotized, and forced to open the safe! In another, Kennedy brings her back from the dead! About which she is markedly unappreciative.

The key advance in this serial is the creation of the now-standard mystery villain. The primary malefactor, known as The Clutching Hand, is in reality someone close to Elaine — someone we might never suspect — and the tension generated by the looming revelation of the identity of the baddie helps to fuel the interest of the viewer.

Director Gasnier had directed Pauline, and co-director George B. Seitz was a successful New York playwright who went West to make it big and did. Seitz wound up making an astonishing 108 films, most notably Tarzan Escapes (1936) and no fewer than ELEVEN Andy Hardy movies (these were a 16-film set [1937-1946] from MGM centered on Mickey Rooney as the loveable, typical American teen scamp; they were wholesome and profitable).

Slopping great portions of adventure, mystery, and romance make The Exploits of Elaine an interesting today, though not as compelling as it was 100 years ago. The thrills and chills of the movie serials would continue in neighborhood theaters for another 40 years.

Posted by BradWeis at 2:20 PM No comments: