Hollywood conspiracy theory! and the wonders of "Birdemic" 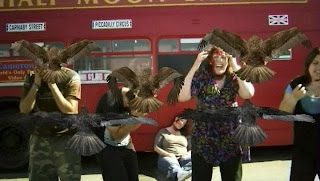 Monday's First Person Cinema series features Ben Russell and his recent work "Let Each One Go Where He May" -- it's 7 p.m. in the Visual Arts Complex Auditorium  on the CU-Boulder campus.

On Wednesday, it’s the very very strange 1977 Japanese horror film by Nobuhiko Obayashi, “House.”
What the hell? No, seriously, what? With American pop and what looks like the Japanese cast of “The Facts of Life.” A piano eats a young girl – well, we’ve all been there, I think.
On Thursday and Friday, what looks to be a very interesting Danish noir comes to the Series – Erling Jepsen’s 2008 “Terribly Happy.”
So even tiny Denmark has hick burgs where webs of lies, betrayals and murders are spun. As an added attraction, the town has a peat bog into which the inhabitants can toss anything or anyone that’s bothersome. No wonder my folks emigrated.
The Boulder Public Library winds up its spring film series on Monday with a 7 p.m. showing of 1957’s “The Good Soldier Svejk: Beg to Report, Sir,” a continuation of the film adaptation of Czech author Jaroslav Hasek’s anti-war satire by Karel Stekly. This show is FREE.
Denver’s Starz Film Center adds Jacques Audiard’s “A Prophet” to its menu, as well as a fresh print of Margot Benacerraf’s 1959 documentary “Araya.”
The trailer is so damn respectful, it makes me concerned that this will be a snore-fest. Good cinematography, though. Was Benacerraf the Venezuelan Einsenstein?
On Saturday at 7:15 p.m., Starz will host “An Evening with Etgen Keret.” The Israeli writer and filmmaker will present “$9.99,” a 2008 animated film by Australian director Tatia Rosenthal based on his work.
Tuesday, catch “Youth Knows No Pain,” what looks to be a fascinating documentary by Mitch McCabe about aging in America and our desperate and expensive attempts to stave it off. The whole idea is absurd to me, but then I am a) a man and b) a slob. I’m not rubbing Rogaine on my bald spot, just sunscreen.
On Wednesday, the documentary “Reporter” deals with journalist Nicholas Kristof and his coverage of Darfur. Denver-based reporter Tamara Banks will be on hand in person. This film looks harrowing and fascinating.
On Thursday at 6 p.m., Colorado filmmaker Amie Knox will present two of her film portraits of artists: “Deborah Butterfield: Dialogue with the Artist” and “Hella Jongerius.”
Complete information on Starz’s Focus on Japanese Cinema can be found in my next post . . .
The Landmark is bringing two new selections to its chain: at the Chez Artiste, it’s “City Island”:
Quirky indie comedy. It’s a crapshoot.
And, finally, “The Runaways” comes to both the Greenwood Village and the Mayan.
Word of mouth is, it’s the classic rock bio – Cinderella story, downfall and redemption included. The difference is, this one is encrusted with the glitter, drugs and nasty temperament that characterized the mid-‘70s, and it concerns my one of my favorite bands of all time! It might be worth it just for the nostalgic rush.
(P.S. Less Joan Jett and Cherie Currie, and more of Lita Ford, the future Queen of Speed Metal! P.P.S. “Cherry Bomb” doesn’t come close to being the group’s representative song – both “Waiting for the Night” and “Don’t Go Away” are far, far finer.)
Over at the Thin Man Tavern, the Wednesday film series begins a run of works by Wim Wenders, beginning with “The American Friend” at 8 p.m.
Look sharp and you’ll see directors Sam Fuller, Nicholas Ray and others.
The novel by Patricia Highsmith that is the basis of this fascinating but difficult film also spawned Liliana Cavani’s cruelly disregarded 2002 “Ripley’s Game.”
Over at the Bug Theatre, the Emerging Filmmakers Project takes place Wednesday at 8 p.m. Tickets are only $5, and viewers will see new work and talk to the filmmakers. As I’ve said before in relation to short-film programs at film festivals, these screenings are where talent is developed, displayed and tested. If you believe in supporting artists as they learn their craft, attend.
SPECIAL EVENTS
Did you know there’s a Turkish Student Association at CU-Boulder? Did you know they serve up Turkish Movie Nights? Did you know there is a Turkish cinema? Friday at 5:45 p.m., somewhere within the confines of the Eaton Humanities building on campus, Abdullah Oguz’s 200 “Bliss” will be shown.
LATE SHOWS
Starz’s “The Watching Hour” will present the Japanese horror film “House” at 10 p.m. Friday and Saturday (see trailer above). And at the Esquire at midnight, it’s that cult wannabe, “The Room.”
Keep those informational updates coming in, folks! This list is becoming longer and more comprehensive each week. Hopefully, we can grow the audience for cinema of all shapes and sizes.
Posted by BradWeis at 1:23 PM No comments: