Forest Room 5: to the hallucinatory abyss 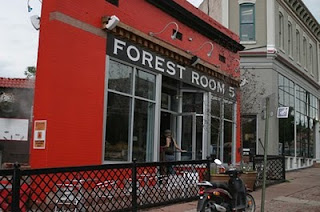 A precocious and peppy journalist would start with, “Forest Room 5 is a festival of fun for the funky film fan.” This kind of trite, alliterative effusion just doesn’t do much for me. This is not a consumer guide. This is just what happened when I went there.

I hadn’t been to the place in a long while when a couple of my friends and I started a long night out there recently. It was one of those perfect experiences, when you begin to spiral pleasantly around and down the drain and things are both hilarious and profound, and conversations wend twixt the forgettable and the brilliant with eye-blink rapidity. Forest Room 5’s dark, surreal ambiance and emphasis on cinematic pleasure makes it a decadent roost indeed.

It’s located at 2532 15th St. in Denver, halfway up a steep Highlands neighborhood block that has been largely demolished and remodeled over the last 40 years. A brisk and scary walk over the old 15th Street viaduct (an unfenced and busy I-25 beckons to teeterers above) from My Brothers’ Bar brings you there.

The building itself is the extensively remodeled former home of the Highland Bar, a legendary Denver dive which for decades served as a haven for ladies and their girlfriends. Owner Thomas Nesler blew out some of the walls, built a patio complete with gas-jetted faux-campfires, and threw in a private room in the back.

The décor is a lumberjack’s wet dream. Forest Room 5 bears a mock-Parks Service identification plaque on an exterior wall, dark wood and knotty pine prevail within, and odd touches such as narration from vintage National Parks documentaries sounding over speakers in the restrooms telegraph the concept with unambiguous glee. This joint is weird and it doesn’t care who knows it.

A long central table bisects the main room longitudinally. It’s configured perfectly for one long line of folks to sit and watch the above-bar screen that is alleged to have dimensions of 10 by 60 feet. Those with their backs to the action can swivel and peer up at it too, not uncomfortably.

Does this totally screw up traffic moving through the room? Too bad. The nightspot serves up cinema.

No apologies there, either. The selections seem to be pretty random – I showed up for a doozy of a double bill that kept me from focusing on my pals for long stretches. In fact, we all broke off periodically to gaze in horror at Leslie Nielsen wrestling a bear.

But I’m getting ahead of myself. The movie seemed to peer over our shoulders as we huddled over our drinks. We kept catching glimpses of actors, and that obsessive impulse to identify the movie rose up inside me. Oh my God, is that Michael Ansara? Richard Jaeckel? An extreme young and disco-haired Andrew Stevens? Linda Day-George? CHRISTOPHER GEORGE?

Mawkish, honey-tinged memories of the ‘70s were dancing in my head. The bartender solemnly handed over the DVD case. “Day of the Animals”! 1977! Holy eco-terror film, Batman!

This was a special bane of my formative movie-going years. The “natural horror” subgenre of the mid-‘70s and beyond was due to a combination of the success of “Willard” (Bruce Davison commands a supporting cast of rats to eat Ernest Borgnine, no small feat) in 1971, the rapid rise of the disaster-film craze shortly thereafter (thank you, Irwin Allen), and the transformative nature of “Jaws” in 1975 provoked a slew of epics of Biblical proportion. The plot always involved the planet taking revenge on mankind for its follies, usually involving environmental destruction or other such trifling with matters best left to the deity.

The premise of “Day of the Animals” is a classic. Ozone depletion causes wild animals (only those above 5,000 feet above sea level, natch) to become murderous towards humans. Of course. A cross-section of the American public in miniature is dropped into the wilderness via helicopter for a lovely hiking trip juuuuuust before the area is sealed off. Yes.

Dogs, hawks, bears, vultures, snakes and other creatures make our posse of potential Lunchables run the gauntlet. In what is probably Nielsen’s campiest role, he plays an evil advertising executive who turns survivalist bully and Alpha male as stock lightning shots punctuate his “Lord of the Flies” moment.

“You lily-livered punk!” he exclaims at one point. “I’m running this camping trip! I take what I want and I give you what I want to give you!” Then he angrily skewers Andrew Stevens with his hiking stick. No wonder this was Ruth Roman’s last substantial feature film role. And kudos to the director for picking up the Spielbergian warmly-lit close-ups of despairing children watching as their parents are eaten. I suppose it was intended to be poignant; it's positively gruesome.

The combination of ratty editing, poorly executed special effects, wooden dialogue, and the prospect of a shirtless Nielsen tangling with a pretty tame-looking stunt bear during a midnight downpour is stunning. (Speaking of getting-killed-by-a bear scenes, it’s right up there with Donald Pleasance being smothered by Bosco in “Circus of Horrors.”) 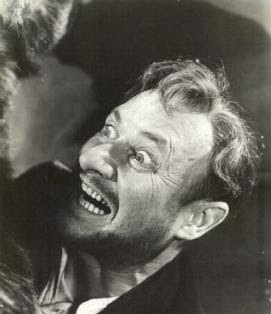 "Day of the Animals" is so bad it becomes a photographic negative of the cinematic experience, an exuberantly horrible monsterpiece.

The next feature up to bat was the equally enthralling “Call of the Yukon” from 1938. 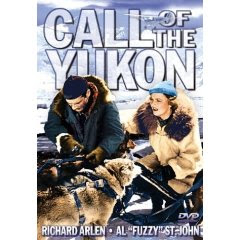 Here’s Arctic adventure, a thrilling mishmash of studio footage, documentary intersplicings, and limited outdoor scenes shot – with real Inuit! (I believe they used to call them Eskimaux.) It was filmed by "Breezy" Eason, who as you might guess from the nickname could get through many, many camera setups a day, quality be damned.

Stalwart B-movie hero-types Richard Arlen and Lyle Talbot (Talbot racked up more than 300 film credits!) are involved with a – lady reporter! (Beverly Roberts) who has a talking raven (Winkey) and gets lost in the wilderness covering a story. Other stars include Firefly, the collie; Buck, the St. Bernard; bears Roughie and Toughie; and human Al "Fuzzy" St. John, silent-comedy vet, prototypical cowboy sidekick and nephew to Fatty Arbuckle.

Had enough? Me too. Everything started to go black. The celluloid strip of my thinking got jammed in the gate and started melting. I could take no more. We moved on.

I called down to Forest Room 5 after my visit, and the man who answered the phone and claimed to have something to do with the running of the place said it has a library of 2,000 films, with a focus on the avant-garde and independent films; that “we give people the opportunity to show their films here,” that they do engage in local film events such as the Denver International and Festivus film festivals.

And they show films outside during the summer. I have seen this, outside of staged outdoor film festivals, randomly across the country and it’s a wonderful experience – from Habana Outpost in Brooklyn to Satchel’s Grill in Boise, there’s nothing like a warm night outside with good food and friends, and a good flick to watch.

Is there a down side? I have heard the rap that it’s already too trendy; that it’s full of posers; that the service isn’t so great. I didn’t notice. I was enjoying myself immensely.

Email ThisBlogThis!Share to TwitterShare to FacebookShare to Pinterest
Labels: Theaters