'The Power of the Dog': Repression on the prairie 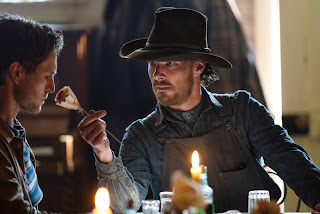 The Power of the Dog

The Power of the Dog is a tough nut to crack. It’s a horror movie disguised as a Western.

The monster in question is Phil (Benedict Cumberbatch), who runs a family ranch in Montana with his brother George (Jesse Plemons) around the turn of last century. Phil is a twisted and bitter soul, endlessly rude and demeaning to all around him. When George finds love with and marries widow Rose (Kirsten Dunst), she moves into their echoing and dusty mansion with her effeminate teenage son Peter (Kodi Smit-McPhee).

Phil’s contempt blossoms into constant harassment of the two newcomers. Rose responds by taking to drink, while Peter chooses another path to dealing with Phil’s aggression. His quiet quest for vengeance leads the film in an entirely unexpected direction.

So where are we? The hills director/screenwriter Jane Campion films in stand for Montana, though they look nothing like (Campion is from and shoots in New Zealand). The trappings of the Western are there, but Campion uses the form to examine conceptions of masculinity. Phil’s secret and suppressed yearning for men feeds his simmering rage, but he turns gruffly tender towards Peter as time passes. The film is full of, and makes great play with, the contradictions.

Campion and cinematographer Ari Wegner create a palette of grays and browns, emphasizing the dreary same ness of the landscape. Cumberbatch delivers an Oscar-worthy performance as the conflicted Phil, and the rest of the ensemble is equally strong. The film places its focus on the repercussions of the macho ethos, its only resolution death and destruction.