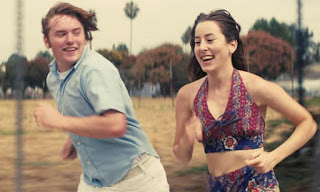 Nostalgia is cheap, but it’s tough to pull off convincingly. It’s easy to stir up rosy rememberings of times gone by, and the past soon becomes a playground for the fond imagination – unless you get the details wrong. Such is not the case with Paul Thomas Anderson’s Licorice Pizza, a ‘70s coming-of-age dramedy that features the breakout performance of its new-to-film leads, Alana Haim and Cooper Hoffman. It’s a clever, lightweight movie that is happy to tell some shaggy dog stories to while away your time.

Like many of Anderson’s films, it’s a fanciful look at a particular era, in which the San Fernando Valley serves as a kind of gas-crisis era Brigadoon, an enchanted place where things happen, but serious things don’t, where the grown-ups are all seemingly morons or maniacs. Of this milieu is 15-year-old Gary Valentine (Hoffman), an erstwhile child actor who is aging out of his profession. At his high-school Picture Day he meets 25-year-old Alana (Haim), the photographer’s assistant. For Gary, it’s love at first sight; for Alana, it’s annoying.

What follows are the somewhat random adventures of the two on their way to a forseeable future together. Anderson spices up the story with star character turns – Bradley Cooper, Tom Waits, Sean Penn – that keep the audience alert. It’s all in good fun. Gary tries to become a waterbed entrepreneur; Gary opens a pinball arcade. Alana drifts from job to job and tries out various men for size; they don’t suit her.

The biggest reason to see the film is to watch the lanky, awkward, and beautiful Alana Haim. She’s obviously a new actress, but she’s refreshingly readable, open and disingenuous to a degree not seen since Richard Linklater’s cast of unknowns in his ‘70s high-school saga Dazed and Confused. Haim is a heart-stealer, and her presence keeps the interest alive even when the movie ambles down some dead-end paths.

Those looking for a linear story will be quite frustrated, but for those with patience, Licorice Pizza is rewarding.