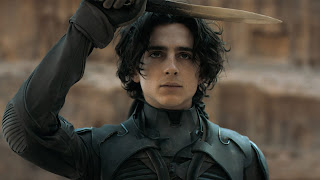 World-building is exhausting. It takes a dogged individual to achieve a tremendous, big-budget vision on film. This Denis Villeneuve has done in this most recent iteration of Frank Herbert’s 1965 sci-fi novel Dune, a project that has daunted such imaginative directors as Alejandro Jodorowsky and David Lynch. In the process, conjures up an epic that is at its best majestic and at its intermittent worst is ponderous and glum.

That there are 24 producers listed on Villeneuve’s new adaptation of, is testament to the scope of the new project. In that way also it attests to how this new Dune has an industrial feel to it, something consciously engineered rather than inspired. It is an efficient entertainment.

The director and his team craft a unified, believable world, or worlds, rather. For this saga involves a spacescape populated by a vast assortment of characters. It is at heart a romantic fantasy, populated with rival houses, as in Game of Thrones. The House Atreides (Oscar Isaac is the paterfamilias, Duke Leto; Timothee Chalamet plays his son Paul, the linchpin of the story) is dispatched by the galactic Emperor to the desert planet of Arrakis aka Dune. There it is to produce and control the mining and distribution of a hallucinogenic “spice,” a magical substance vital to the functioning of interstellar travel, found only there.

Intrigue derives from the sinister attentions of House Harkonnen, led by an unrecognizable Baron (Stellan Skarsgard). It seeks the downfall of Leto by means of surprise attack. Paul and his mother, the concubine Lady Jessica (Rebecca Ferguson) are thrown into the hostile environment of Dune. And this, 2 hours and 35 minutes later, is as far as we get in the story, for indeed this is only Part One.

The story’s leisurely pace allows us to feast our eyes on the lush cinematography of Greig Fraser and on Patrice Vermette’s elaborate and well-conceived production design. But the pace is deadening, even as characters issue exposition and set up conflicts with a kind of dull obedience. This Dune is a somber affair. It lacks even the hallucinatory intensity of Lynch’s failed 1984 version of the story, which has remained despised critically, but maintains a shaggy vitality not present here.

This Dune is impeccably crafted, but its immensities mute the human story within it.