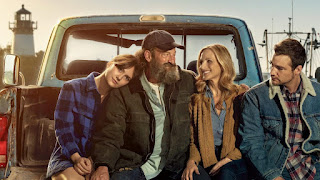 CODA stands for Child of Deaf Adults. It also means the final passage of a piece of music. The double meaning perfectly expresses the scope of this coming-of-age film, which has earned some Oscar nods along the way. Of all the Best Picture nominees this year, this comes the closest to good, old-fashioned movies of the past – straightforward and heartfelt.

Now, is it a crime to be heartfelt? Nowadays something that isn’t inherently cynical doesn’t stand much of a chance in movie theaters. CODA breaks through with a solid story and a gallery of great performances.

It’s the story of 17-year-old Ruby, the only hearing person in a deaf family of four. They fish for a living in Glouchester, Massachusetts, and Ruby is weighing her choices for after high school. She latches onto her love for singing as a way to make to the prestigious Berklee College of Music. She wrestles with her feelings of loyalty to her family, for whom she serves as an important mediary with the hearing world.

The film is itself an adaptation of the 2014 French film The Belier Family, but it is so strongly grounded in behavior and atmosphere as to be and original creation. The acting ensemble selected for this film is excellent in every respect, including Emilia Jones as the feisty Ruby, and the equally compelling Troy Kotsur as her father and Oscar-winner Marlee Matlin as her mother. Daniel Durant, as her brother, and Eugenio Derbez as Ruby’s snappy music teacher, are also top-notch.