'The Tragedy of Macbeth': a noble effort 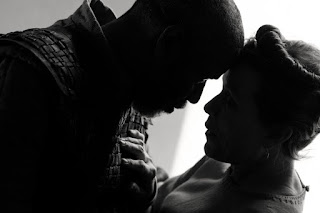 The Tragedy of Macbeth

I am a Shakespeare nut. Just turned out that way. He sends me.

But it’s not easy. To get the most out of him, it’s best to study him a little, something few seem to have the time for these days. A pity, for he is infinitely rewarding to patient fans.

have seen more Macbeths than you can shake a stick at, if that’s your idea of a good time. Joel Coen’s new version of Shakespeare’s tragedy is intriguing, but so impeccably crafted and restrained that it drains away the vital energy that drives this, one of Shakespeare’s most violent (and quotable) plays.

The play is famously cursed (one is supposed never to mention its name in a theater – referring to it as “the Scottish play” will do), and many productions, on stage and on screen, have gone south on its creators. Orson Welles’ “Macbeth” (1948) was clunky, talky, and soundstage-rooted (as is Coen’s version). Roman Polanski’s infamous version (1971) was hallucinatory and gory. To date, the best balances of fantasy and violence in “Macbeth” have been in Akira Kurosawa’s adaptation, “Throne of Blood” (1957) and filmed records of stage performances such as those by Ian McKellen (1979), Nicol Williamson (1983), and Patrick Stewart (2010). (OK, I haven’t seen the 2015 version with Michael Fassbender.)

So what’s the story? What makes this play such a difficult endeavor? It is steeped in forces of dark magic, for one thing. Three witches tell the Scottish chieftain Macbeth that he is soon to become king, and that his friend Banquo will sire a line of kings. As Duncan is already on the throne, this presents a problem. Macbeth tells of the witches to his equally ambitious wife, Lady Macbeth, and the two plot to murder Duncan, throw suspicion on Duncan’s sons, and lay claim to the crown themselves.

Coen seals the action in the studio, and all characters appear from and disappear into a gray mist. The monochrome approach, and Bruno Delbonnel’s artful cinematography, gives us a movie that looks like an album of 19th century engravings. Coen’s adaptation streamlines the story, but carefully ensures that the viewer is never lost in the story.

Kathryn Hunter plays all of the three witches; her sinister croak and splayed limbs give a rough foretaste of doom. The rest of the cast is solid, and includes Brendan Gleeson as an affable Duncan. But the film lives or dies on the performances of its two leads. Denzel Washington as Macbeth and Frances McDormand as his wife are a conundrum.

The dynamics the would-be royal couple move through are extreme. Lady Macbeth disintegrates into madness, and Macbeth moves away from weakness and uncertainty, clinging to his doom ever more stubbornly as the acts progress. But these are assured, sedate interpretations, a middle-aged pair of Macbeths. They do not seem to be descending into evil or madness; they seem instead to be making an increasingly bad series of business decisions. It is easy to go over the top acting-wise in “Macbeth,” with its multiplicity of horrors to enact. However, the maturity and restraint the two leads display tamp down the manic edge that animates the story. These Macbeths are too mundane to matter.

Filming Shakespeare is tough. It’s very easy to slip into dutiful versions that dull the mind instead of inspiring. Coen’s effort here is an honorable slog.