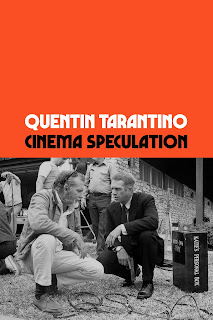 Here’s what happened. I picked up this book, and read it all the way through, without stopping. That’s the highest recommendation I can give.

This excellent set of essays on film history and aesthetics is the first non-fiction work from director Quentin Tarentino. I am a fan of his work, but not a blindly unquestioning one. So it’s not just a worshipful gushing I give when I say this is the most engaging book about film I have read in a quite a while.

First and foremost, Tarentino writes in what has been called a “conversational and amusing” style. He’s not a stuffy film scholar. Neither is he an arrogant and jaded film professional. Instead, he proves here that he’s still one of us – a regular guy who happens to love movies.

His excitement is infectious. He gives us a childhood in movies watched, takes us on a guided of tour of some of his favorite genre films, and takes a look at the waves of the New American Cinema. He doesn’t like Truffaut, but I forgive him.

It helps immensely that he is of my generation, born three years earlier than me. The films he references watching as he grew up burst immediately to bloom in the minds of any contemporaneous readers. (I spent much unsupervised time at the cinema growing up.) Hey, he hates and fears Bambi, too! And FINALLY, thanks to him I understand the difference between the Dead End Kids, the East Side Kids, the Little Tough Guys, and the Bowery Boys! Who knew?

Tarentino starts by giving us a look at his childhood, one spent most impressionably in movie theaters, watching films not really for children (Dirty Harry? The Outfit? Black Gunn?). His penchant for creating dramas of vengeance undoubtedly stems from early exposure to grindhouse fare. Cinema Speculation is precisely that – an expansive and entertaining discussion of the glories of movies (that’s movies, not cinema).

Best of all, in a tribute to second-string L.A. Times film critic Kevin Thomas, Tarentino praises his optimistic, open-minded approach to writing on movies, and even cites his opinions as being influential in practical choices Tarentino made in making his own films. This affirmation of the critical role in the movie process is tremendously heartening.

Like the film writing he admires, Tarentino’s essays are straightforward, unaffected, and compelling. Whether you appreciate his insights or not, his book is a good time.