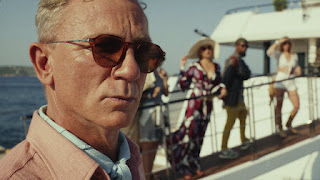 Glass Onion: A Knives Out Mystery

Who can explain the sudden popularity of the murder mystery? Perhaps it was the pandemic, which led some to binge on the pleasures of Christie, Sayers, and James. Perhaps everyone is in the mood to solve puzzles, preferably in each other’s company, thanks to the long period of isolation. At any rate, what was thought to be the province of advanced-years cottagers turns out to be something fun and stimulating, something everyone would like to take a crack at.

Netflix released Glass Onion: A Knives Out Mystery to theaters for only a week, in preparation for its release online on Dec. 23. This unique strategy means that all of us who love a good murder mystery were forced to go out in the cold, risking our health and sanity by actually travelling to a movie theater to catch it before it left the theaters. What was a casual event has become a fraught expedition.

The devilish trick to reviewing a murder mystery is to not give anything away. Its success relies on the revelation of information, the unwinding of motives, and the identification and punishment of the murderer. Since analyzing how this film covers these important genre specifications would be to reveal the ending, it’s necessary to step back and refer to some of its other, non-spoiler elements.

Director and screenwriter Rian Johnson created a franchise when he released Knives Out (2019), the first adventure of the world’s greatest detective, Benoit Blanc, played with southern-fried acerbity by Daniel Craig. Now the sleuth finds himself summoned to a Greek island, where an Elon Musk-like billionaire, Miles Bron (Edward Norton) has summoned his oldest friends, who are also slavishly dependent on his favors.

Bron proposes a murder mystery game to be staged at his palatial mansion. What happens next is up to the viewer to discover, but let it be said that Johnson plays the game fairly, sprinkling clues here and there, surprising us with twists, and leading us patiently to the denouement.

Blanc is a memorable character, and Craig plays him with obvious pleasure. (Blanc is evidently living in a domestic situation with a character played by Hugh Grant, and other celebrities pop in unexpectedly as well.) The filming is spare, straightforward, and functional, bereft of directorial flourishes that might confuse the story.

Is it as good as the first movie? Not quite. You must take this film’s premises with a grain of salt, and there is some wiggle room when it comes to clues that might lead you in the wrong direction. Still, Glass Onion’s conclusion is logical. That it serves up its mystery with a soup-con of humor makes it all the more welcome, especially during the holiday season. We can discuss spoilers after December 23.,

Come for the mystery; stay for the satire of late-stage capitalism. And, you will love Derol.