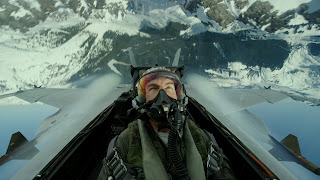 Hoo boy. Well, it’s a good thing I waited this long to see and review this movie. That’s because it’s critic-proof. Not that many critics disliked it. In fact, pretty much everybody loved this movie. Predictably, I didn’t. Why?

First, I am immune to the charms of Tom Cruise. We are about the same age, and I grew up with his movies. But somehow, his earnest and cocky persona didn’t cause that kind of affection and admiration in me that I feel for the great white male stars from earlier years. I know intellectually that he has the stuff of which leading men are made, but I don’t feel it.

Now he mints his greatest financial win with this film, a sequel to the original Top Gun from 1986. It’s a new and improved product, engineered precisely to evoke heart-pounding, fist-pumping ecstasy in the viewer. And, if you are a male ages 13-18, I guarantee this will provoke that.

But what if you’re older and simply have given up on the glorification of the military and the assertion of the righteousness of violence? If that’s true, then there’ nothing in this film for you. If you don’t accept Captain Pete “Maverick” Mitchell as the World’s Greatest White Man, this film will be an empty exercise in action virtuosity.

You see, Mitchell is still a rebel, 36 years after the first film. He’s also still only a captain, when his friend “Iceman” (Val Kilmer) has by now become an admiral. Why? Because he’s a rebel, dang it! He gets in trouble all the time, and Iceman saves his bacon. This time, he’s the pilot of a experimental craft, and by golly he flies even though he’s told not to, and then flies it faster than it’s supposed to go, so it breaks and apart and he bails out. What a man.

So, do we see this character as an emotionally retarded man-child, struck in Oppositional defiant disorder? No, we see him as the apogee of male aspiration – free, irresponsible, disturbingly ageless. He indeed possesses the biggest penis in the universe.

He is reassigned to his old combat school, the Top Gun of the title. Now he has to pull together a ragtag assemblage of earnest and cocky youngsters who yearn to be schooled in the Tom Cruise academy of rule-breaking charm.

It turns out they have to attack a foreign uranium-enriching plant, run by a country that shall remain nameless (rhymes with Schmiran). This righteous task is a deadly trip through a winding canyon, bordered by missiles, protected by enemy fighters, with a minimal chance of success and no margin for error! It’s basically the final sequence of Star Wars, with Cruise as Luke Skywalker.

That’s right! Little old Tom Cruise goes from coaching the jet jockeys to getting back into the game, leading the mission himself. WHOOSH! BAM! BOOM! What do you think happens? What we would all like to have happen. Then there’s another climax! And another!

Wow. Smoke a cigarette and calm down. What else? The homoerotic sublimation is there in spades, so there’s that. There’s Val Kilmer, the same age as Cruise, looking old enough to be his grandfather. There’s the typical hard-bodies-on-the-beach scene, the meditative motorcycle ride, the second chance with an old flame. All the biggest hits are there, strung like beads on a wire.

It’s a triumph of the industrial cinema. It is wired to stimulate your pleasure zones. Unless you are like me, in which case you’ll go back to watching your weird old foreign art films.