'Avatar: The Way of Water': Splashy 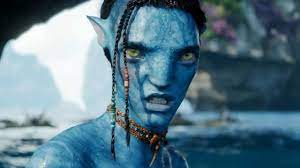 Avatar: the Way of Water

James Cameron is driven. He makes film spectaculars, and he keeps topping himself -- and everyone else in the industry -- with his new and fanciful creations. The Terminator, Aliens, The Abyss, Terminator 2, Titanic, Avatar. One record-breaking event after another. He seems compelled to create, literally, a new filmic landscape with each new project. We have waited for 12 years to see what’s on his mind now.

Technically, it’s a whole new ball game. Most impressively, he shoots much of his film underwater, and does so as fluently as he films above the surface. He then retools that reality with his amazing use of CGI and what must be the most advanced visual effects department in the world, crafting a new and complete ecosystem, rendered down to the most exacting details. In that sense, it is perfection itself.

This is a classic fantasy epic. That being said, it is one whose plot and themes a retread of previous Cameron narratives. We are once again on the beautiful, unspoiled planet of Pandora, inhabited by giant, blue, tailed, super-hippie indigenous people called the Na’vi. These noble savages (it is easy to conceive of it as Dances with Wolves in outer space) are uniquely attuned to the natural world, and interact with it in perfect symbiotic harmony.

Until the %#$*(% humans show up. Yes, they’re back, and this time they’re not after Unobtanium, they’re here to colonize Pandora to escape the dying Earth. Yes, we Homo sapiens are the villains, and Cameron’s contempt for humanity was never clearer. He is agonized about our inability to stop contributing to our own environmental destruction, and The Way of Water is very much a plea on behalf of the Earth, in cosmic trappings.

The hero of the last film, human-turned-Na’vi Jake Sully (Sam Worthington), is now a father and tribal leader. Conveniently, the evil Col. Quaritch (Stephen Lang), Jake’s nemesis, has been reborn as a Na’vi avatar as well, and he loses no time in going after Jake, the head of resistance to the human incursion. This quest for vengeance defines the rest of the film. Even the benign Dr. Grace Augustine (Sigourney Weaver) returns, in altered form.

A flight from the dangers of being hunted leads them far away from their homeland, to another tribe that lives in sync with the ocean. What follows is about an hour of illustrating the created environment, leisuring in its wonders like a troop of travelogue-struck tourists. This guided tour of the oceanic life of Pandora does little to advance the plot, but it gives us a lot to look at and to ponder.

Did I mention the magical psychic whales? There’s plenty of them. You see, they’re being hunted, illegally, as they produce a substance that stops aging (a new Unobtanium, if you will). It is this hunt and its thwarting that take up the last third of the movie, propelling us along in a fast-paced, back-and-forth manner (how often can those kids get captured? In that way, it’s remindful of Peter Pan, with Quaritch as Captain Hook.)

So the whales and the Na’vi and the humans get it on, and it all winds up as you might expect.

So is it worth it? At three hours, the extreme vividness of the experience tends to overwhelm. It floods the senses, makes it hard to maintain focus. The middle third of the film is a stroll through visual effects. The cliche “kill your darlings” applies here. There is no one to tell Cameron if he’s gone overboard in the world-building department. His tenacious, exacting manifestation of the results of his imagination is an amazing sight.

Those looking for a new narrative experience will be disappointed. Stick around for the visuals.