The NFR Project: 'The Navigator' 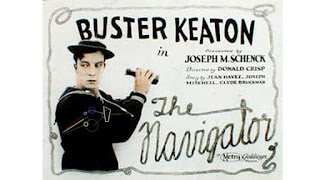 Buster Keaton was at his best when he worked on an epic scale. Chaplin charmed at the level of the human. The other great silent comedian, Harold Lloyd, like Keaton, faced dangers and overcame obstacles. But Keaton the clown pitted himself against the laws of physics and the whims of fate, succeeding when he rose to the challenge these mighty universal forces, learning to harness them . . . or at least to ride them out.

In this case, the immensity in Keaton’s way is a ship at sea. Here Keaton plays the oblivious and foppish Rollo Treadway. His idea of a long walk is one across the street between his sweetheart’s mansion and his own. One morning he spies a happily married couple and decides he’s going to get married himself. That day. His girl doesn’t see it that way.

Through a suitably complex set of circumstances, boy and girl end up, unbeknownst to each other, stranded on the immense and adrift steamship of the title. Keaton milks the locale for gags, starting with the comic ballet of the two of them just missing finding each other over and over again on the enormous vessel. Once united, the two prove themselves not up to the simple tasks of eating and sleeping, dwarfed by the ship and its outsized equipment. They are two innocents marooned in a grown-up world.

Eventually, they come up with creative workarounds to their problems. In the meantime they go aground and spring a leak near a cannibal-infested island. Repair work is needed. Buster must go over the side in a deep-sea diving suit, bringing his lunch pail and a DANGER – MEN WORKING sign . . . and a gun, just in case. The underwater gags are plentiful.

Finally, Keaton overcomes an unruly octopus, frightens the natives away, and rescues his girl. Still, the two are pursued until they abandon ship. Faced with an all-out cannibal attack, they sink beneath the waves together. And rise as suddenly on the convenient tower of a passing submarine.

Despite the brilliance of the big set-pieces, Keaton is great in the little moments, too – like the dirty look he gives his girl after gulping some of her sea-water coffee, or the cheerful wave he gives as he goes over the side. He becomes a hero by virtue of his calm imperturbability. In future films, he would match his wits against ever-more complex and seemingly whimsical entities – a locomotive, a steamboat, even a tornado.

The NFR is one writer’s attempt to review all the films listed in the National Film Registry in chronological order. Next time: Lon Chaney in He Who Gets Slapped (1924).