The NFR Project: 'The Chechahcos' 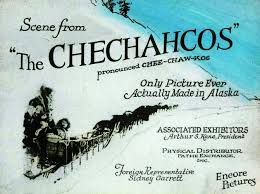 Historically, regional filmmaking has been rare in American cinema. Film production by and large has issued from Los Angeles or New York. It’s refreshing to see a well-made film that was put together thousands of miles from Hollywood.

The Chechahcos was the creation of the Alaska Moving Picture Corp., itself the creation of George Edward Lewis and wealthy Anchorage entrepreneur Austin E. Lathrop. The idea was to exploit the breathtaking and authentic landscapes of the territory by setting stories in and among them. This film is the outfit’s only production.

“Chechahcos” is Inuit for newcomer, and this story is a standard melodrama about just such folk. A child and her mother are separated in a boat mishap and each think the other dead. Two prospectors adopt and raise the girl while the mother goes off with the villain of the piece, a disreputable gambler who’s handy with a knife. All are thrust back together again years later, and relationships are revealed and old scores settled.

What’s remarkable is how well this film holds up compared to the mainstream product of the time. The performances, writing, directing, lighting – all are executed professionally. They even pull off an effective restaging of the arduous ascent to Chilikoot Pass. The film’s biggest card to play is of course its exterior scenes, which play out against magnificent, snowy backdrops. In this film, the landscape is a character. (The villain expires, at the mercy of a calving glacier.)

The NFR is one writer’s attempt to review all the films listed in the National Film Registry in chronological order. Next time: Von Stroheim’s epic Greed.