The NFR Project 'He Who Gets Slapped' 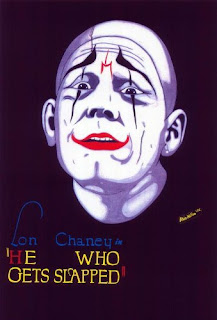 He Who Gets Slapped

The Swedish actor Victor Sjostrom is best remembered today for his last piece of film work, playing the lead in Ingmar Bergman’s Wild Strawberries (1957). But Sjostrom was a powerful pioneer in silent film, who heeded the call of Hollywood and created several brilliant movies there before abandoning directing, and America, for a career in acting back in Sweden.

Between 1912 and 1923, Sjostrom made 41 films in his native land, most remarkably the dark fantasy The Phantom Carriage (1921). Metro-Goldwyn-Mayer recruited him, and the director headed west and anglicized his name to Seastrom. He Who Gets Slapped is his first important American film.

Slapped  is a melodrama that pairs him with the amazing Lon Chaney, who was fresh from his success as The Hunchback of Notre Dame (1923). It’s the story of “HE,” once a brilliant scientist whose work and wife are stolen by his aristocratic “benefactor,” Baron Regnard. “Fool! Clown!” his wife calls him. Humiliated and discredited, HE abandons his calling and becomes a clown in the circus – one whose claim to fame is a masochistic comic routine in which he is slapped over and over again.

Chaney’s tragic clown is disturbingly grotesque, in contrast to the lovers in the picture (a very young Norma Shearer and John Gilbert – both were to become great film stars). The Baron reappears, having dumped HE’s wife, and wants to possess the young girl, scheming with her greedy father to arrange their marriage. The stage is set for Chaney, also in love with the girl, to take revenge against the Baron and the girl’s father.

This is the kind of role Chaney would essay again and again – a heartsick outcast, harboring a guilty secret, desperate for vengeance. His whitefaced clown makeup amplifies the torments his face expresses. For his part, Sjostrom brings a steady hand to the proceedings, making the implausible plot palatable and focusing on the emotions of the piece. The result is an acutely observed psychological thriller.

The NFR is one writer’s attempt to review all the films listed in the National Film Registry in chronological order. Next time: the Reverend Solomon Sir Jones films.