The NFR Project: 'Within Our Gates' 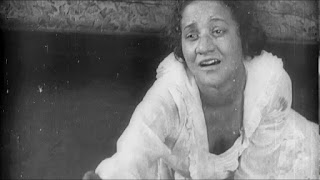 Oscar Micheaux (1884-1951) was an African-American. As such, he was excluded from the mainstream culture, denied the means of production to make cultural products. So, he made them on his own. Within Our Gates is his earliest surviving feature film, and its intelligent boldness is worlds away from what Hollywood was cranking out at the time.

Micheaux began his creative career as a novelist while in his 30s. A producer’s interest in adapting his first book into a film led to Micheaux doing it himself, in 1919. Over the next 30 years, he made at least 42 films, providing what came to be termed “race films” — that is, films for black audiences.

Though only his second film, Within Our Gates demonstrates a maturity far greater than that of mainstream films of the day. He tackles prejudice, racial violence, and the dilemma of black people faced with innumerable obstacles to “uplifting” themselves, to be taken seriously and given respect. Micheaux’s characters are intelligent and complex, in sharp contrast to the usual depiction of subservient, unintelligent “darkies” in mainstream film.

In the film, young teacher Sylvia tries to raise money for a black school in the South — the key to empowerment is education. Her quest takes her to the North, where prejudice still exists under the niceties of polite society. In saving a young child from a speedy automobile, Sylvia is struck herself and taken to the hospital. Providentially, the car that struck her was owned by a wealthy philanthropist who give her ten times the money she needs.

Interspersed among Sylvia’s adventures are portraits of African-Americans from many classes and types, not shying away from negative portrayals. In particular, Micheaux gives us a black minister, Ned the preacher, who uses religion cynically to control the gullible. He tells his congregation that white affluence and political power condemns their souls, while the black folk, simple and pure in heart, will humbly go to heaven. He literally lets his white bosses kick him in the ass. Only when alone does he admit his complicity to himself. This kind of examination and criticism of organized religion was unprecedented in any film before or at the time, and in few films after.

The film ends with a flashback that shows us a double lynching, as well as a sexual assault. These white crimes are portrayed matter-of-factly, as though they would be familiar to the film’s viewers. Though the final moments of the movie are given over to optimism, it’s the mayhem of white violence that sticks in the memory. “And remember the white man makes the law in this country!” says one intertitle.

Micheaux’s film pulls no punches. If white people of the time thought about its subjects at all, they would have judged the film as deeply subversive, as it was and still is.

The NFR is one writer’s attempt to review all the films listed in the National Film Registry in chronological order. Next time: ‘The Four Horsemen of the Apocalypse.’