The NFR Project: Chaplin's 'The Kid' 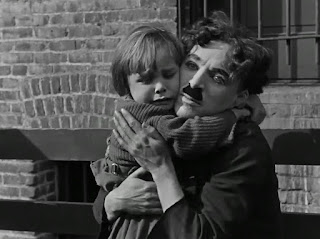 Chaplin was eager to make his first feature film, and he planned a parent/child theme, half slapstick and half sentiment — what became The Kid.

At this point in his career, Chaplin was moving on past short subjects, as well as contracts with companies that pressed him for fresh material, ready or not. In January 1919 he formed United Artists with Douglas Fairbanks, Mary Pickford, and D.W. Griffith. This move gave him and the others creative freedom and autonomy. He took his time making The Kid — nearly an entire year was spent shooting footage that boiled down to a little over an hour’s run time. (Chaplin recut the film later for posterity, whittling it down to 53 minutes.)

The best of the early child actors was Jackie Coogan (best known later as the original Uncle Fester, in TV’s The Addams Family). At the ripe young age of 5, he was chosen by Charlie Chaplin to co-star in Chaplin’s most successful film, and his first feature-length.

Now, I hate children in film. There is something fundamentally off-putting for me about the presence of the squeaky-voiced little ones on the big screen. Their cuteness is annoying as hell. They are usually included in a film as convenient plot points or for the manipulation of sentiment. Honest film work that depicts the complex, kaleidoscopic nature of childhood is rare. However, Coogan is spontaneous and engaging, and makes the movie work.

Chaplin nakedly depicts the catch-as-catch-can experience of the poor. Undoubtedly, he drew on his own memories of growing up poverty-stricken, practically homeless, without a stable parent or sufficient resources. He keeps the framing functional and on a human scale, maximizing the warmth the protagonists exude.

The story is simple, right out of Victorian-era melodrama. An abandoned mother of a newborn leaves her baby in a rich man’s car, which is stolen. The baby is left in an alley, where it is found by none other than Chaplin’s Tramp character. After a short spurt of trying to get rid of it, the Tramp relents and takes the child home to his squalid attic room.

Time passes, and now we see the Tramp and the Kid scraping a happy living together. The Kid breaks windows, and the Tramp comes along and repairs them. Only when the child becomes ill does the heedless claw of bureaucracy stretch into their lives. The authorities invade their garret and takes little Jackie away to the orphanage, spawning an epic pursuit and battle across and through the city. The Tramp may be laughable, but his fierce love for his adopted child is laudable. In the end, the child is reunited with the mother, and the Tramp is put together with both.

Ironically, Coogan would find himself let down by his real parents, who blew all his savings from his child-acting career, prompting the creation of the Coogan Act, which mandated the protection of child performers’ earnings.

In this film Chaplin successfully unites comedy and drama, laughter and pathos. His confident and mature craftsmanship would only get better.

The NFR is one writer’s attempt to review all the films listed in the National Film Registry in chronological order. Next time: ‘Manhatta’.