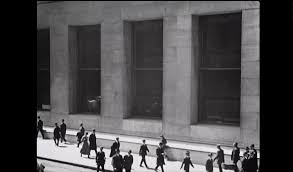 Just pictures. Pictures of buildings, bridges, trains, boats, and the people leaking out of and into them. That’s the premise of this 10-minute ribbon of reality, captured and preserved forever as a monument to the look and feel of a big city in the last century. Its largely static shots turn the urban landscape into a triumph of abstract line and form.

It’ been tagged as the first avant-garde film made in America. It’s also the parent of later, similar films such as Alberto Cavalcanti’s 1926 Rien que les Heures (‘Nothing but Time’), Robert Flaherty’s 1927 Twenty-Four-Dollar Island, Walter Ruttmann’s Berlin: Symphony of a City (also 1927); and Dziga Vertov’s 1929 Man with a Movie Camera (1929).

Sheeler was an artist who turned to photography early on in his career, who was consumed by a love of documenting technology, industry, and large-scale change. Strand, solely a photographer, weighed interests and themes markedly similar to Sheeler’s, making the natural collaborators.

The grand accomplishment of painter Sheeler and photographer Strand is to exit the need for narrative entirely. The film is what it is, a seemingly simple recording of everyday reality. But it is grander than that. It is an echo of the early cinema’s reliance on recording and screening travelogues, actual visits to far-off places such as the Holy Land.

This film focuses on New York City, treating it as an unknown quantity to be examined and considered almost from an archaeological perspective. Steam shovels gape, wrecking balls cavort. The city tears itself down, rebuilds itself, climbs higher and higher. The interpolated, laudatory quotes from Walt Whitman’s poetry reinforces the sense of wonder Manhatta is trying to convey. It’s the city as a poem in steel and brick.

In the end, the film shows us abstract mass against mass, a nearly alien, strictly geometric portrait. The only real creatures at large are large mechanical ones — trains, boats. People are ants, at best scrabbling along the edges of a graveyard (Trinity Church’s). New York City personified.

The NFR is one writer’s attempt to review all the films listed in the National Film Registry in chronological order. Next time: ‘Tol’able David’.