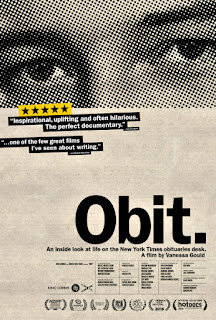 Obituaries do not float to the top of the head when thinking of hot topics for documentary film. First -- the concise summation of a freshly dead person’s life story is not an outwardly kinetic, action-packed process. Second, many think of the craft, or interest in it, as morbid, the work of pale ghouls.

A filmmaker named Vanessa Gould saw through this, though, and created a fine feature documentary film, “Obit,” profiling the legendary obituary department at the New York Times, that’s making the rounds of the festival circuit, including two screenings at the Boulder International Film Festival this weekend.

Oh, and did I mention I’m in it? My obituary hobby is, rather. This is the part where I recuse myself from objectivity, altruism, and lack of self-interest in writing this story.

Here’s what happened – I got a lovely LinkedIn message from Gould a few weeks ago (this would mark the first and only time in 11 years of membership that LinkedIn has proven useful to me, by the way) telling me about the film, her impending visit to Boulder in conjunction with the film . . . and the intriguing message that I was in the film. Would I moderate the screenings and conduct the interviews afterward?

Let’s backtrack. I am a lifelong, dedicated reader of obituaries, with a special place in my heart for expert obituarists such as Fox, Weber, Jim Sheeler, Maureen O’Donnell, and the dearly departed Robert McG Thomas, Jr. and Alana Baranick. The Digital Age expanded the reach of the aficionados of the genre, and now news of notable deaths stream in from around the world, day and night. As deaths occur, they are hierarchized. Those deemed most significant get the most ink, whether saint or serial killer. A newspaper, and even a website, has to make choices about what goes into it, and how big a story needs to be.

I wondered about those obituaries below the radar. The mainstream carries a whimsical obit now and then, but what about the rest? And what about those who, while not world-shakers, lived a life, made a contribution to the world? Surely there must be a sweet spot between the generals, politicians, business leaders, celebrities and others who always got big play above the fold and those who escape notice altogether?

So in July of 2010 I started the Obit Patrol – not a string of self-written obituaries, but a collection of links to obits written around the world, researched and daily and curated with an extreme and stubborn subjectivity. I want to celebrate lives and emphasize positive human capabilities, and have done so, week in and week out, ever since.

Back to the movie. It also happens that, for a decade, I helped out in all manner of ways with the infant Boulder International Film Festival (BIFF), now in its 13th year, including moderating and interviewing. My friends there were happy to have me back, and soon I was viewing the “Obit” screener.

Believe it or not, I would love this film whether or not I accidentally wandered into its frame. For both the obit fan and the casual viewer, “Obit” provides great insight into the process. It takes a canny director to coax life literally out of death, which Gould does here. She faces the crippling challenge, too, of creating compelling cinema out of a job that basically consists of doing research, making phone calls, and typing. Not too sexy. Gould makes it work.

She gives the piece a spine by following the creation of one obituary over the course of the film, punctuating it with interviews, delineations of the daily work cycle, and smash-cut archival collages, illustrations of lives in passing. Brief snatches of scratchy old home-movie footage cements the viewer’s identification with the process – here are the raw recorded remnants of memory, here’s where it starts, the piling and collating of experience, the sieving of significant detail from the mundane mass, the final making of how we remember someone. (Even the master of the Times “morgue,” Jeff Roth, gets to illuminate his role in things as he plows through room after room crammed with files and cabinets of files, hunting down information on the deceased.)

Ideally, an obit is not, as “Obit” explains, a paid death notice, nor a eulogy nor a paean (nor a last chance at revenge), but an honest and factual account of the significant details of one life, preferably about 800 words in length.

The constrictions of the format are as challenging as any in journalism, the deadlines are as rigorous, and the grieving witnesses interviewed about the life in question can be just as cagey, mendacious, difficult, and outright inaccurate as those interviewed about any criminal investigation. Also – no pressure – this may be the last or only time the person in question will be profiled. An obit freezes the way in which a person perceived. It is not a job for slackers or the timid.

From where did the idea for the film come? I called Gould a few days ago and asked her.

“I went to Columbia, and majored in physics and art history,” she said. “When I made my first film, ‘Between the Folds,’ it was kind of a magnum opus. It contained everything I had been thinking about, concerning the art process and the idea of making things physical.”

The 2008 documentary concerns artists and theoretical scientists obsessed with origami, the beautiful intersection of mathematics and art. One of the subjects was sculptor Eric Joisel, who died in October 2010.

“When I was finishing ‘Between the Folds,’” she said, “one of the artists got lung cancer. So, we knew his time was pretty limited. He was reclusive, his family had disenfranchised him. To them, he was this guy folding paper in the family barn, which they thought was embarrassing. Meanwhile, he was reaching a level of creative inspiration that he had never achieved earlier. The sense of cultural loss that was accompanying my feelings around his death was deep. So, I contacted the New York Times, told them about him. And I was amazed. They produced this wonderful obit on this utterly unknown, seemingly inconsequential artist. And I began to think about the layers of it, and the myriad of life stories that flow through that place.”

Gould had challenges. Obituarists were working on deadline as she covered them.

“I promised each writer we would only do one day with them (on the job),” Gould said. “I took the time beforehand to meet with them and talk to them, establish a rapport. Still, we had to get in, get the footage, and get out. It had to be surgical. You don’t screw around with the Times. We shot only about 100 hours of film. Editing took two years.”

Away from the workplace, her miniature portraits of the writers – Fox, Weber, William Grimes, Douglas Martin, and Paul Vitello – really succeed in illuminating their personalities and bring home the qualities need for the job. All involved are thoughtful and eloquent, have extensive experience in other news departments, demonstrate expertise in unrelated disciplines, have lives, share anecdotes. It’s a cliché that reporters a step away from retirement are likely to be sloughed onto the obit desk, but a certain amount of life experience and tact are required, personal experience with loss and a sense of the vagaries of life. (Would you like a 19-year-old intern calling you up for obit info after Grandpa dies? I don’t think so.)

“My main impression,” Gould says of her subjects, “was the abundance of professionalism. They are at the service of and very deferential to their subject matter. That being said, we really savored those moments when they opened up and were vulnerable and human.”

(As to my “appearance” -- it’s a brief clip of now-retired NYT deputy obit editor Jack Kadden checking my site in 2014 that makes a 0:03 appearance near the beginning of the film, and is listed as “additional material: incidental capture,” which also roughly describes my life to date. It is immensely satisfying to know that Obit Patrol is of practical use, especially to the only newspaper to which I still subscribe.)

Obvious puns aside, obituarists do seem to be in a dying business. The “news hole,” and staff, and resources, have all shrunk significantly since the great nationwide journalism purges that began in 2009. In fact, obits, death, mourning, dying, and even end-of-life planning and the problems of aging are taboo subjects in a society that clings desperately to images of youth and vitality. Perhaps only the oncoming bulge of geriatric Baby Boomers will stimulate more serious consideration of those topics.

You never know, though. I just checked the Society of Professional Obituary Writers site, and there are more than five dozen members listed, more than I can recall seeing since its inception in 2007. Death is a constant, and curiosity about it is still there. We still want to know when someone has died, and why, and what their lives “meant.” We still want a sense of that life, even if it’s a life that made no sense. We want context and continuity. And we live in hope that we will be remembered in turn as well, that someone will do justice to our efforts on this planet.

If worse comes to worse, you can always start your own obituary service. I did.

Obit will be screened at the Boulder International Film Festival on Saturday, March 3 at 5:15 p.m. at Boulder High School, 1604 Arapahoe Ave., and on Sunday, March 4 at 12:30 p.m. at eTown Hall, 1535 Spruce St. For tickets and information, please visit biff1.com.