Sam Lucas has the dubious distinction of being the first black man to play Uncle Tom, both on stage and on screen. This and a few other things make this movie, already by 1914 the seventh film adaptation of Harriet Beecher Stowe’s 1852 landmark, best-selling, Civil War-sparking, unconsciously racist saga condemnation of slavery in novel form, a real up and down viewing experience.

Lucas was born free, some dozen years before the Civil War began, and never experienced slavery personally. He began as a guitarist and singer, then joined one of the many of America’s thriving African-American minstrel-show companies. (Yes, there was segregation even between groups of performers that wore blackface . . . wheels within wheels.) He wrote songs, became known for a sad-sack comic archetype in revues.

Rich from his successes and looking to create some serious acting possibilities for himself, he backed a production that featured him as the first African-American Uncle Tom in a stage production (it flopped). He featured in the groundbreaking black musicals of Bob Cole and the Johnson Brothers such as A Trip to Coontown and The Red Moon. He became known as “The Grand Old Man of the Negro Stage.”

Uncle Tom’s Cabin is one of those hated classics taught in schools, and in truth it’s a turgid melodrama with cardboard characters put in motion to illustrate abolitionist and evangelist Christian ideology. However, Stowe found as did James Fenimore Cooper and the dime novelists of the day that style was not as important as plot, and this one had a doozy.

Nice, well-meaning slaveowners (?) are forced to sell two of their human properties, Tom and George Harris. George’s wife Eliza decides to escape and runs north, child in arms, across the semi-frozen Ohio River, leaping from ice cake to ice cake. The golden-curled girl-child Little Eva, devoted to Uncle Tom (whom she owns), grows ill and dies at length, and eloquently (a nice trick stolen from Dickens, who had a thing about killing off child characters to generate readership). The beloved, gentle, passive, obedient, and homily-laden old Uncle Tom gets sold hither and thither, enduring abuse until he is finally beaten to death by some of evil slaveholder Simon Legree’s overseers . . . whom he does forgive before he dies, triggering their conversions, like a modern saint.

The factual background of the controversial novel was disputed, but didn’t deter it from becoming the most read novel of the 19th century. Eliza Crossing the Ice and the Death of Little Eva became iconic, engrained moments in American popular culture.

Its illumination of the detestable practices of slavery helped ignite the dissolution of the “peculiar institution” – but it crafted some horrible stereotypes as well. “Uncle Tom” is a hateful byword now, fighting words for decades in fact, designating an African-American subservient to whites. (Tarentino and Samuel L. Jackson skilfully deconstructs that archetype in 2012's Django Unchained, via the character of  Stephen, a sinister and brilliant"house slave" who conspires with his twisted master to keep everyone else down.) 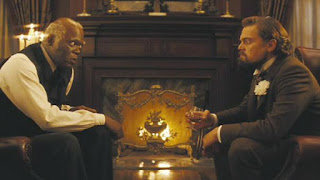 Stowe’s typifying of “happy, lazy darkies,” tragic mulattoes, dark-skinned “mammies,” and Tom himself, created images problematic and best, destined to get stuck like sand in the gears of understanding.

The film’s casting and its shooting contrasts are peculiar. Lucas is the only black actor credited, although there are plenty of black extras. Eliza isn’t black, nor is the child actress made up in ridiculous blackface as the mischievous, thieving, and lying but supposedly endearing slave orphan child Topsy, the original model for the “pickaninny” – a shiftless, comic grotesque that wound up being as dehumanizing as any of the abuses pictured in the book. Lucas himself acts in a subdued and dignified manner, but he’s really just there to suffer. His Uncle Tom, as written, is black Jesus, an inoffensive and unthreatening Lamb of God.

The film’s shooting style is schizophrenic as well. All interior and most “dialogue” shots are presented in a very staid, stage-bound manner, with the principals all lined up and facing front. However as soon as the camera gets outside, things get interesting. Some of the film was shot on location in the South; there are marvelous river vistas, and kinetic shots of a steamboat landing and sailing off. An ambush and gun battle is shot with careening perspectives, sweeping pans, and innovative POV shots.

And a surprising moment. A fellow slave shoots Legree dead in revenge for the killing of Tom; as he does the gun extends forward into the bottom of the frame from his perspective, as if held by the cameraman, and fires. The audience is encouraged to be complicit in the murder of a racist. It was a remarkable flash of empowerment – it would take 57 years and the birth of Blaxploitation film before an African-American person in film would take up arms against white enemies again.

The NFR Project is an attempt to review all the films listed in the National Film Registry, in chronological order. Next time: ‘The Wishing Ring: An Idyll of Old England.’