It’s the end of the world. No hyperbole could encompass the humanity-threatening, seismic impact (for film lovers) of the closing, after 35 years of existence, of Boulder, Colorado’s movie-rental store, The Video Station, yesterday, March 6. It was a playground for introverts, a de facto center of film culture, a lens through which we could see 50,000 ways of looking at the world -- the most comprehensive commercially available film library between Chicago and L.A. For one of the few times in history, most of one art form was in one place, capable of being surveyed to the heart's content. We will never have the same opportunity to understand and enjoy movies again. If you feel strong enough, read on.

I was getting my hair cut last week, and I informed my long-time barber of the sacred repository’s imminent doom.

“That sucks, but I have Netflix, Hulu, so many streaming services,” she said. “I can watch whatever I want.”

This is why video stores failed. A decade after the birth of the video rental store in 1975, Blockbuster and other lowest-common-denominator video-rental chains began knocking off the independent, idiosyncratic film-rental libraries. Next, Netflix’s 1998 innovation of renting DVDs through the mail rapidly won over consumers reluctant to go shopping for them. Once broadband streaming challenges were overcome in 2007, the proliferation of subscription services began, dooming the holdouts. (One last, lone store, the Videotique in Denver, survives by focusing on material selected for its LGBT content.)

The Video Station was born in 1981, the brainchild of Scott Woodland. Its first location, near 38th and Arapahoe, was before my time. In 1990, Woodland and his partner Ivory Curtis moved it to a funky, freestanding two-story building at 1661 28th St. In 2002, Woodland sold the business to Bruce Shamma. By 2013, traffic had slowed to the point at which the store needed to reduce its rent, and the store moved to much smaller quarters at 5290 Arapahoe. Finally, economics caught up with them. 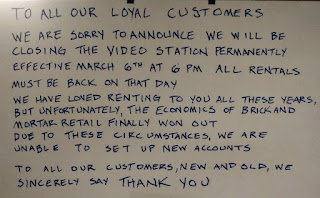 A good video store was the best incubator for cinephiles (its most famous offspring being Quentin Tarentino). Video Station’s former employees include director Derek Cianfrance and his long-time editor, Tim Helton, Criterion producer Susan Arosteguy, and Turner Classic Movies’ Richard Steiner. Steiner, ironically, is Vice President of Digital Activation for TCM, which is rolling out streaming plans as we speak.

Netflix, Hulu, Amazon, FilmStruck, Star, Showtime, and others are now fighting for eyeballs. Average viewers would rather subscribe to a stream than own a collection of films. Not surprisingly, most of these viewing services are turning into de facto production houses, finding more income in the creation of original projects than in stocking older work.

But, as we know, the machinations of the marketplace don’t always result in the best for mankind, even with an art form we’d like to pretend is not one. What about all the film nuts – lovers, students, writers, explorers, aspiring filmmakers, historians, researchers (of which I am almost all). Can you watch whatever you want online? Easily? Most importantly – how do you navigate what cinema is inside a relatively unnavigable space, with no humans to interact with, no guideposts, and no context?

The way that movie-browsing takes place now online is awful. The analogy that springs to my mind is this – take all the books from the public library and throw them in a pile. Now, make a mask with a thin horizontal slit for your eyes. Now – organize them. There are multiple copies of the most popular titles and genres on top, along with everything the library GUESSES you might like. Everything else is mixed in and settling to the bottom. Advanced search capabilities? Not so much. Oh, and if you really need to find a film, you need to pay to belong to a bunch of COMPETING libraries on the off chance that one of them is carrying it this month.

Plus – what do you do when the lights won’t come on? Going back to my barber – in the same conversation, she talked about their wifi going out at home.

“For two whole days!” she said. “We couldn’t do ANYTHING. I was so bored, I almost read a book!”

There is no remedy for losing access, whether for technical or financial reasons. In front of and smaller than the sheer terror of a person not being able to function in this world without access to the digital realm is the still lively fear that I won’t ever, ever again get to check out the Wim Wenders’ cut of “Until the End of the World,” or Gance’s “La Roue,” or the kicky ‘60s sci-fi/horror “Wild Wild Planet,” all of which I could grab at the Station, manufacturing the most bizarre triple- and quadruple-feature evenings you could imagine.

The most recent study I could find, from March of 2016, estimated that Amazon Prime Video carried over 20,000 titles, Hulu over 10,000, and Netflix carried a little over 7,000. At its most expansive, the Station was two stories crammed with easily more than 50,000 titles (there was some duplication during the VHS-DVD transition), corralled into categories and subcategories that wound across and down shelf after shelf, upstairs and down – groupings by director, actor, country, genre, subgenre, sub-subgenre (and for some time, a discreetly curtained and well-frequented adult-film nook). You could wander for hours, glancing through film boxes, compiling wish lists, or flipping through immense folders of TV offerings – the Station was ahead of the game in its collection of vintage television, especially British fare.

The stock was the definition of eclectic – from de Sica to stag films, obscure artistic revelations and the crudest of B-movies. What was essential was that you had a schematic in place, and a staff that was hired on the strength of their passion for and knowledge of film (Scott used to test them regularly). Some were friendly, some were jerks, but everyone had strong opinions. That’s what made a query there worthwhile.

Categories were defined and could be explored, connections could be made, loves and hates defined. The Station encouraged you to dig into its catalogues – there were $1 nights for sci-fi and horror, pre-1960 American films, and TV fare. To pick any movie from any category was to take hold of a long string of associated ones. Take war films. Did you like Samuel Fuller’s “The Big Red One” (director’s cut, of course)? Then how about “Battleground,” or “The Big Parade”? Working along these lines, I stumbled into Klimov’s intensely disturbing World War II drama “Come and See,” a game-changer.

The Station was on a mission, and it succeeded, at least as far as I am concerned. I came to Boulder with some knowledge of film, but once I became a customer, that knowledge increased exponentially. I began renting from them so long ago that I can recall renting not only their VHS tapes but a bulky blue VCR to play them on as well.

I’d see the other regulars, and we’d compare selections. On weekend nights, the lines would be out the door, all eyes glancing nervously at the IN/OUT board to see if they could grab the last copy of whatever was hot. I saved my nickels and pennies and would rent my way through entire sections – film noir, Westerns, silent film, BBC chestnuts, Shakespeare, opera, avant-garde weirdness, and on and on. By 2001, I’d cracked the film-writing market and have been at it ever since. I couldn’t have done it without the Video Station.

When Oliver Stone visited the Boulder International Film Festival in 2011, he held up one of his DVDs. “This may be the last time you see one of these,” he said. “People won’t be able to come over and see what movies you have. What are you going to do – tell people, ‘Hey, check out my Netflix queue?’”

There seems to me something vitally necessary, damnably important, about being able to get your hands on an artistic artifact, to see it in context among its fellows, to be part of a community of interest. With the loss of the Video Station, this model falls apart. There was a sweet spot in time, when customers and product could intersect without agenda, let or hinder. The video store was where you could go to discover the capabilities of the medium.

Shamma is currently boxing up all his movies and putting them in storage, with no intent of selling off his stock. Good for you, Bruce! Smart move. In 20 years, or less, video will return just as vinyl did, and it will be time to rent out a storefront again. If worse comes to worst, they could be donated to an institution for the tax write-off, and at least preserved as an accessible collection.

I went in one last time, renting Ken Russell's extremely disturbing, hard-to-find "The Devils" and Henry King's silent drama "The Winning of Barbara Worth," certainly the only movie to ever co-star Ronald Colman AND Gary Cooper. I couldn't make myself visit the store on the last day. My wife did, and scored a homemade poster lauding "The Red Shoes," which will now go to a place of honor in our house alongside a light bulb from the marquee of Denver's long-gone art house The Flick.

Meanwhile, I have more than 1,000 films at home, Let me know if you need to borrow something. 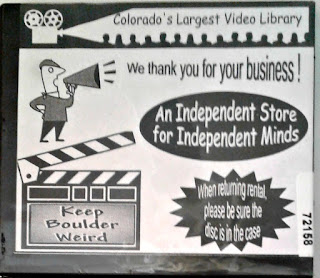 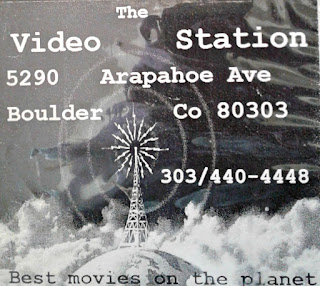