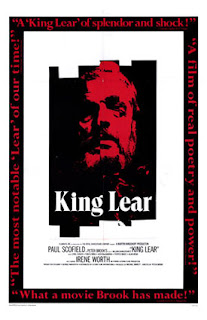 The best recorded version of Shakespeare’s greatest play is nearly impossible to find. Why?

English theater director Peter Brook is famous for his audacity and the effectiveness of his methods. In his time, he has given us groundbreaking stagings of classical and contemporary plays. His forays into film have recorded some of these efforts and given us works such as “Lord of the Flies,” “Marat/Sade” and “The Mahabharata.”

His epic and cruel construction of Shakespeare’s “King Lear,” based on a stage production with Paul Scofield in the lead role nine years earlier. In this film, Brook chains the domestic tragedies of betrayal to a global vision of bloody disorder, a place where a world goes to die – with no new order in sight to replace it. 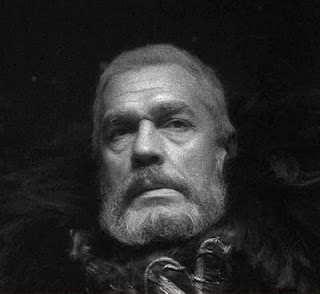 It is reported that Brook’s interpretation of the play is strongly influenced by the thoughts of Polish literary critic Jan Kott’s 1961 book, “Shakespeare Our Contemporary.” This surprisingly popular book caught the zeitgeist, wresting the Bard and other revered authors from staid, academic stasis. It posits Shakespeare as a dark and current force, as savage and alienating as Brecht and Beckett.

Brook’s film sets the play in a near-prehistoric, preliterate setting – a gritty, frigid, soiled landscape dotted by low-slung fortresses, cooking fires and armed men on horseback. (The windswept, lunar dunes of northern Jutland in Denmark fit the bill admirably.) Here, the prehistoric and the post-apocalyptic are nearly the same.

Henning Kristiansen’s cinematography reeks of smoke, of mist, of fevered and wavering uncertainties, limned in chalky gray. The camera seems to sit still only in front of those with evil purpose – it trembles as it witnesses abuses.

The play is pared down ruthlessly. It clips along, and not a shot is wasted. Similarly, every character speaks with a quiet intensity that is unmatched in Shakespearean performance. This, the most routinely overplayed in the entire canon, is whispered, growled, intimated, and deadpanned as its players commit ever more mounting horrors upon each other.

Many critics have remarked on its stark Beckettian quality, and its seeming relation to the screen compositions of Bergman and the quality of light of Gunnar Fischer.

But, if you look at precedents such as Brook’s “Lord of the Flies” and “Marat/Sade,” you see this aesthetic already at work – fragmentation, off-centered compositions, abrupt cutaways, and a camera that moves mercilessly into the face of the speaker. The result is comparable in emotional power to that of the efforts other Shakespearean expert Kurosawa.

Here Lear, so cold and austere to begin with, contains all his flaws in embryo. He is willful, vain, magnificently childish. When his wits turn, they seem to do so at his command – he states, “Oh, Fool, I shall go mad,” it is a pronouncement, not a cry of despair.

His madness is his gateway to a higher perception of the world’s hypocrisies, but Shakespeare doesn’t let him off the hook. His reason, given back to him almost negligently, is snatched away by the hellishness of an existence in which “man’s life as cheap as beast’s.” 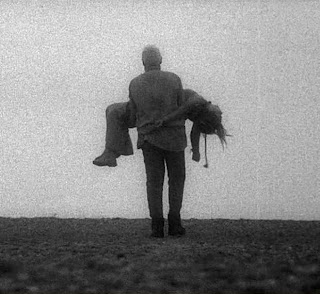 So why is it so difficult to find? My two-month search for a copy to review brought me a battered VHS tape from an obscure college library halfway across the country. In an age when the rarest recordings are exhumed and made available, surely we can conjure up a landmark like this.

It’s as gripping as any horror movie, as frightening as any dystopian science-fiction film. As Scofield’s Lear commits his dying arc backwards, in slow motion, down and out of the frame, to end it all, the abyss is palpable.
Posted by BradWeis at 8:34 PM