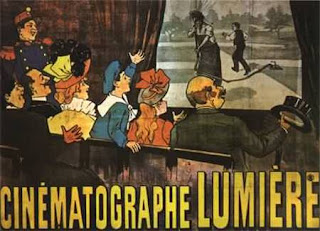 A recent article by A.O. Scott of the New York Times about the pleasures of Paris and film prompted me to make my own list of films made in and about the French capital. As usual, a simple list has grown into a multi-part series.

Paris is a precious, unique place -- beautiful and fascinating and strange. In Western culture, it holds a significance matched only by London and New York. It contains remains from all its historical periods, from pre-Roman to today. It bears the marks of grand gestures of absolutism and lightning-strokes of shameless anarchy side by side.

It was spared the massive destruction visited upon other European capitals in the 20th century; even the German general charged with leveling it during the Nazi withdrawal couldn't bring himself to do so (see the 1966 Rene Clement film "Is Paris Burning?")

(Oddly enough, Paris is the most often-devastated metropolis in modern science-fiction films.)

As Jake Coyle of the Canadian Press can testify, Paris is the best place in the world to watch a movie.
A nifty little site for those wanting to catch a flick in the City of is http://www.secretsofparis.com/paris-cinema/. There are more than 300 cinemas there, meaning you could make pretty much a year’s work out of hitting them all, taking weekends off to do other junk – evidently there’s a lot to do there.

Paris IS the birthplace of the moving picture, after all – at least in terms of being where people were first charged  on December 26, 1895 for watching 50-second loops of “reality” footage, and the immortal comedy “l’Arroseur Arrose” (in English, “The Hoser Hosed” or “The Waterer Watered”).

I have only clocked seven days in Paris, and I only saw one movie there. It was a dilly. The Centre Pompidou, where all the cool art is, has an awesome cinema as well. Footweary, my wife and I caught part of a salute to Hammer horror films – the craptacular “Circus of Horrors,” starring everyone’s favorite cineNazi, Anton Diffring.

Among other delights, it features Donald Pleasence, with hair, speaking French (much to the amusement of the audience, except we two Yanks)! To top it all off, he’s eaten by a dancing bear. This is only 30 minutes in, mind you! Tres droll. 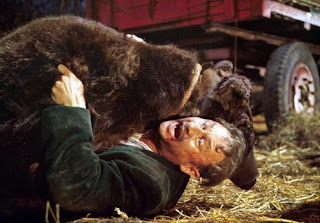 "No, Bosco, no!"
When it comes to movies set in, or concerning, , there are several categories from which to choose. The first and easiest to dismiss is that of films containing the words “” or “French” solely to entice viewers by virtue of those words’ cachet. These films, by and large, blow. Examples: April in Paris, Bachelor in Paris, Charlie Chan in Paris, The Last Time I Saw Paris . . . French Kiss, French Leave, French Lesson, French Postcards, The French Sex Murders . . . all having to do with romance or at least naughtiness (OK, except for An American Werewolf in .) Oo.

Then there is Hollywood-Paris. We'll go there next time. 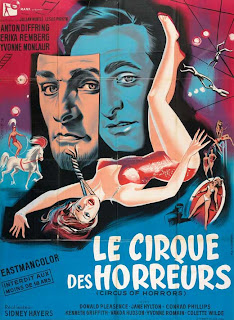