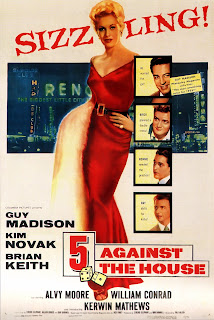 Any trailer that starts with the alliterative frenzy of “4 GUYS . . . A GAL . . . AND A GADGET” deserves a little love. And this tawdry little gem of a B-noir deserves a modicum of attention.


The sync is off in this preview, but it’s a nifty little caper flick that’s loaded with future talent. Columbia recently released this as part of a five-film “Film Noir Classics” set, along with the infinitely better-known “The Big Heat” by Fritz Lang, as well as “The Sniper,” “The Lineup” and “Murder by Contract.”

Columbia cranked out its share of cheaply produced noirs during the heyday of the genre, and this one is directed by Phil Karlson. Karlson served time in the bowels of the industry, working on Abbott and Costello films, Bowery Boys entries, and Charlie Chan flicks.

He hit his stride with his trilogy of crime films starring John Payne – “99 River Street,” “Hell’s Island,” and “Kansas City Confidential,” which supposedly inspired Tarentino’s “Reservoir Dogs.” (Karlson later made “Walking Tall,” made a bundle, and lived happily ever after.)

Here he works with an adaptation of Jack Finney’s first book. Jack Finney! Sound familiar? He went on to write the science fiction classics “The Body Snatchers” and “Time and Again.”

Karlson directs this with his usual grim efficiency, and much of the shooting takes place on location in Reno, Nevada – “The Biggest Little City in the World.” The plot is familiar – a perfect crime goes awry. What’s most interesting is the non-catastrophic resolution of same, and the cast –

Kim Novak: Her first big role as the girlfriend/chanteuse was followed immediately by her work in “Picnic,” and stardom, most notably in “Vertigo.”

Brian Keith: Sure, we remember him primarily from “Family Affair,” but this interesting actor delivers a solid performance as the unstable member of the thieving quartet at the center of the movie. He later did great (and overlooked) work for directors such as Peckinpah (“The Deadly Companions”), Sydney Pollack (“The Yakuza”) and John Milius (“The Wind and the Lion”).

Alvy Moore: Oh my God, it’s Mr. Kimball from “Green Acres”! The crew-cut comic relief specialist will come to mind most easily as the hapless agricultural extension agent from that TV series.

Kerwin Mathews: SINBAD! It’s the debut of the handsome leading man who would so often play the hero of pre-CGI special-effects fantasy epics such as “The 7th Voyage of Sinbad” and “The 3 Worlds of Gulliver.”

And yes, that’s the brilliant radio actor William Conrad in a small but pivotal role.
Posted by BradWeis at 7:48 AM