The NFR Project: 'The Thief of Bagdad' 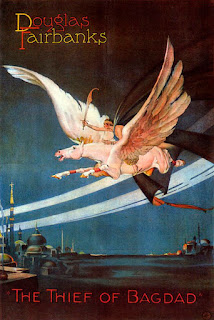 The Thief of Bagdad

Douglas Fairbanks (Sr.) was at the top of his game. The movie star, America’s most popular, had worked his way up in the film world, first as the character of the archetypical gung-ho, grinning all-American (as in Wild and Wooly, reviewed here) and then at the center of costume dramas, starting with The Mark of Zorro, reviewed here.

After Zorro (1920) came the large-scale adventures of Douglas Fairbanks in Robin Hood (1922). Tasked with topping himself, Fairbanks did so by creating this epic fantasy derived from the tales of The Arabian Nights. The film’s production design and special effects, combined with Fairbanks’ magnetic performance, carry the day.

Fairbanks is Ahmed, the carefree and rebellious character of the title. Fairbanks is in incredibly good shape for the film, wearing a costume that practically bares all. Brown from the sun and lithe as a dancer, Fairbanks pantomimes his role expertly. His irrepressible energy comes through even when he’s at rest. He is ever-comfortable in the role of hero.

In the film, the thief falls for a beautiful princess and, seeking to win her hand, goes on a quest for a magical treasure. Production designer William Cameron Menzies created a fantastic world for Fairbanks to inhabit. The immense sets, towering upwards, dwarf the action below (and, some critics say, overpower it). The Art Nouveau style is in use here, featuring organic shapes and asymmetry. Rich costumes complete the picture.

The special effects were cutting-edge for the day, and are still impressive. (No CGI – all practical effects.) Fairbanks got ideas for them from the more ambitious German films of the day, especially Fritz Lang’s Destiny, which he bought the rights to distribution in America for and then held from release, so as not to be upstaged.

And how did they make that magic carpet fly? It turns out they rigged up a ¾ inch steel plate, five by eight feet, and suspended it from a crane with piano wire. Movie magic.

The NFR is one writer’s attempt to review all the films listed in the National Film Registry in chronological order. Next time:  ‘Body and Soul’.