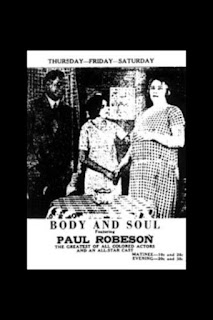 We first encountered Oscar Micheaux with the appearance of Within Our Gates (1920) on the National Film Registry list. The self-taught filmmaker made movies for an African American audience, cranking out at least 42 films over a 30-year period, working well outside the mainstream. Body and Soul continues his examination of the Black experience.

In the film, a criminal masquerades as a preacher in order to exploit the faithful. He defrauds a widow, rapes her daughter, and escapes. The End. Needless to say, this didn’t go over well with film censors. Micheaux was forced to tack on an “it was only a dream” sequence at the end to counteract the darkness of the story. Micheaux was extremely wary of the exploitative possibilities of religion.

This film marks the screen debut of the great Paul Robeson, who played both the fake preacher and his good twin brother. Later in his career, Robeson chose not to recognize this and two other small acting jobs in front of the camera as his first work on film, preferring to cite his leading role in The Emperor Jones in 1933.

The NFR is one writer’s attempt to review all the films listed in the National Film Registry in chronological order. Next time:  ‘Ben-Hur’.