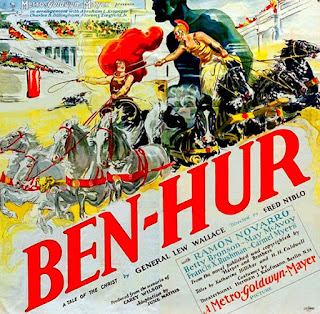 Ben-Hur: A Tale of the Christ

Ben-Hur was always a big deal. (Hey, the life of Christ is a subplot.) The 1880 novel by Lew Wallace from which this film was adapted became one of the most popular books of all time. From 1895 through 1920, the book’s lavish theatrical version commanded massive attendance. Though we remember the Oscar-winning 1959 film adaptation the best, it behooves us to remember this earlier production, one of Hollywood’s first attempts at creating an epic.

No expense was spared to bring this project to life. The film’s budget totaled out to $3.9 million, the largest of the silent era. A million feet of film was shot; thousands of extras animated the big scenes. The religious sequences were shot in two-strip Technicolor. The production started out in Italy, but was moved back to California for completion. The director’s role went through many hands. Despite obstacles and setbacks, the undertaking was completed, and with it MGM had a blockbuster.

For those not in the know, Ben-Hur is the tale of Judah Ben-Hur, a Jewish prince who is unjustly betrayed by his former Roman friend Messala, who sends him to the galleys and his mother and sister to imprisonment. Through luck and perseverance, Judah achieves his revenge, then converts to Christianity.

It is remarkable now to see the inventiveness of this production. The grand sea battle and the iconic chariot race are just as compelling as in the 1959 version – in fact, much of the chariot race is duplicated shot for shot. (1959 director William Wyler was one of many assistant directors on this production). Ramon Navarro is fine in the title role, and Francis X. Bushman hams it up magnificently as Messala. Bushman was loath to take the role until William S. Hart, who played Messala in the original stage version, told him it was the meatiest part in the drama.

Despite its massive success, the movie did not turn a profit until its 1931 re-release. It would be over 30 years until Hollywood attempted its like again.

The NFR is one writer’s attempt to review all the films listed in the National Film Registry in chronological order. Next time: ‘The Big Parade’.