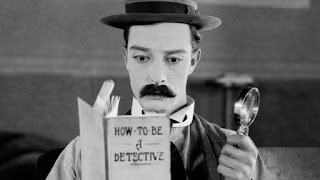 Sherlock Jr. is Buster Keaton at his most fanciful. It’s one of his string of great, hit films from the period 1920-1928, and in it he goes the closest to pure absurdity he would ever come. It’s a virtuoso technical marvel, complete with a famous sequence that has been identified by some as inducting Keaton into the pantheon of surrealists.

The story is simple. Buster is a movie projectionist who dreams of becoming a great detective. He’s sweet on a girl, but a romantic rival steals and pawns her father’s watch, and plants the evidence on Buster. Disgraced and rejected, he returns to work and starts the film within a film. He falls asleep.

Then the magic happens. His dream self rises out of his sleeping self, thanks to the use of double exposure. (He even lifts his dream porkpie hat from the peg the real one hangs on, and puts it on.) He wanders into the auditorium. The villain and the heroine of the film are locked in conflict. Incensed, Buster leaps up through the screen and into the film. The villain promptly pitches him out again.

Buster leaps in again – but the scene changes, to a fancy doorfront, then to a garden at night, to a busy street, to the edge of a cliff, to a lion-filled jungle, and on and on. Keaton retains his position on the screen, but the background keeps slipping under from him. Each time, he’s thrown into peril. (The sequence idea was borrowed by Chuck Jones for his Daffy Duck vevicle, Duck Amuck, in 1953.) The cuts and positioning are precise and the result is hilarious. The surrealists clutched Keaton to their bosom when they saw this as an articulation of conscious absurdity, a daring questioning of the nature of reality. It could be seen as that, but it is first and foremost funny.

The montage segues into the film within a film we’ve been seeing. Buster’s rival becomes the villain, his girl the girl. Buster is the suave and accomplished Sherlock Jr., “the world’s greatest detective,” chasing down a stolen necklace instead of a watch. Of course, as his alter ego he is successful, confounding the criminals and the audience with his visual trickery.

When he awakens, a happy solution presents itself (his girl is a better detective than he is), and Buster ends up alone with his girl in the projection booth. He takes his cues from a romantic scene in the film, gets his girl back, and then scratches his head in befuddlement when the scene dissolves to one of the couple onscreen with a brace of babies.

This tour de force contained more special effects than Keaton would ever attempt again in one film.

The NFR is one writer’s attempt to review all the films listed in the National Film Registry in chronological order. Next time:  ‘The Thief of Bagdad’.