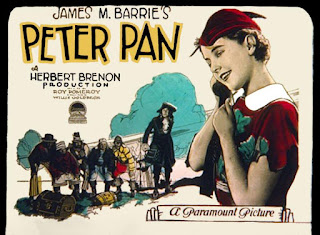 The first film adaptation of J.M. Barrie’s 1904 play is a perfectly charming piece of work. The story of the Boy Who Never Grew Up became an instant children’s classic, but the primary engine of its fame was the lauded theatrical version, which played to packed houses for years.

For the uninitiated, the story takes place in Edwardian London, where three young children encounter the bluff, brave Peter, stuck willingly in eternal boyhood and looking for adventures with his companion the fairy Tinker Bell. Using a combination of fairy dust and “wonderful, lovely thoughts,” Peter teaches them to fly and takes them off to Never Never Land, where there are pirates, Indians, and mermaids to encounter.

This film wisely follows the playscript closely. From the pantomime dog Nana to the wire flying effects and on to miniatures and double exposures, all the fantastic elements in the film are played out to great effect. Character actor Ernest Torrance plays Peter’s foe Captain Hook to comic-villain perfection (he is best remembered as Buster Keaton’s irascible father in Steamboat Bill, Jr.). Betty Bronson plays Peter, continuing the tradition of casting a mature woman in the role. There is something to read there about the androgynous nature of childhood.

Of note is the contribution of cinematographer James Wong Howe, here still early in his lauded, Oscar-winning career. This is only the tenth of his 130-plus films, but his uncanny eye melds the footage into a coherent whole.

In a cynical time, you could do worse than watch this bit of whimsy.

The NFR is one writer’s attempt to review all the films listed in the National Film Registry in chronological order. Next time: Buster Keaton’s ‘Sherlock, Jr.’