The NFR Project: 'Nanook of the North' 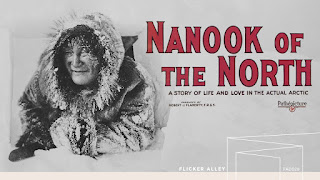 Nanook of the North is the first commercially successful feature-length documentary film. But is it a documentary?

Robert J. Flaherty was an explorer and photographer who decided he wanted to make a film about the Eskimo (Inuit) he had encountered. He shot film for two years, built up a rough cut that was praised – and dropped a lit cigarette onto his original camera negative, sending it up in flames and destroying it. He promptly returned to the Arctic region, spending a year remaking his film, this time centering it on the story of one Inuit family. Except it wasn’t really a family.

Nanook was actually named Allakariallak, and he did not live in a primitive manner. His wives were actually Flaherty’s women. Flaherty got Allakariallak and a cast of other natives to enact traditional hunting and crafting techniques. The natives hunt walrus, fox, and seal; Nanook captures a kayak-load of fish to feed his “family.” The group treks across the icy wastes in their dogsled, kept constantly in motion by the search for food. In the wild, they build an igloo to shelter themselves.

So, is the film invalidated by this approach? Does it accurately record these people’s behavior? The controversy over Flaherty’s manufacturing of a narrative on film continues in serious ethnographic circles. In a contemporary culture in which “reality shows” are rigorously scripted, it doesn’t seem to be such a big deal today.

His work has been classified as “salvage ethnography” – the recording of cultures threatened by modern civilization. He did it without condescension, in fact romanticizing the Inuit struggle for existence. No one can deny its power as a film. It is still beautiful and compelling. Flaherty is deeply in love with the landscape and his subjects, and it shows. We can’t help but emphasize with the film’s subjects; as strange as their existence is, they are recognizably human.

The NFR is one writer’s attempt to review all the films listed in the National Film Registry in chronological order. Next time: Tom Mix in ‘Sky High’.