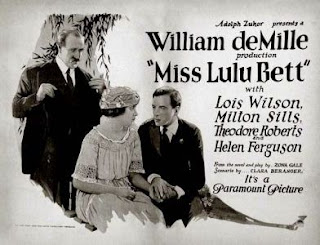 The output of early Hollywood was primarily escapist fare. But there was also room for “serious” films, many of which were taken from honored books and plays. Such is the case with Miss Lulu Bett.

It’s the adaptation of a 1920 Zona Gale novel, which she adapted into a Pulitzer Prize-winning play. The story is a cross between Cinderella and Ibsen’s A Doll’s House. The heroine of the title is a young drudge trapped in a small town, one who works all day cooking and cleaning for her sister’s family in exchange for room and board. When she’s not being taken for granted, she’s browbeaten and belittled by her petty family.

Change comes in form of her brother-in-law’s brother, who comes for a visit and jokingly offers to marry her. She takes him up on it as a means of escape from her circumstances. After a week, though, he reveals that he may be a bigamist. She returns home, scolded into not revealing the truth in order to keep the town gossips’ tongues from waggling. Of course, despite this wag they do anyway, speculating on Lulu Bett’s unfitness for marriage. Fed up with her reprised role as the family servant, she declares her independence and leaves the house. Only after doing so, she gets together with the town’s schoolteacher, who has loved her all along.

Director William C. DeMille was the brother of the famous Cecil B. DeMille, and he was known for his unflashy, naturalistic films. Here he creates a work of quiet realism, keeping his camerawork unobtrusive and focused on “the toils of the commonplace.” The result is a clear-eyed examination of the constraints placed on the women of the day. Becoming someone’s, anyone’s wife was seemingly the only ticket out of the family home.

But Lulu makes a way. First, she saves her niece from a foolish attempt at elopement, then frees herself from mental slavery in a gripping scene. Smashing dishes, spitting dialogue, Lulu renounces her family and packs up and leaves for good. This proto-feminist liberation was in keeping with the times – women were given the right to vote only two years earlier, and the idea of the independent, self-assured woman was just beginning to take hold in popular culture. Though hardly remembered today, Miss Lulu Bett is a hallmark of America’s changing attitudes.

The NFR is one writer’s attempt to review all the films listed in the National Film Registry in chronological order. Next time: ‘Nanook of the North’.