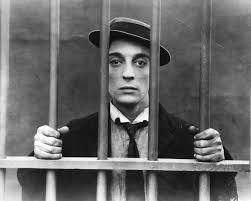 Cops is a perfect little film, taking the premise of the comic chase and blowing it up to epic proportions. It’s the 12th of 19 shorts that Keaton starred in and directed between 1920 and 1923. I already wrote about his first significant short, One Week, here.

Buster Keaton was the greatest pure filmmaker of all the silent comedians. In Cops, he uses geometry and perspective to make his gags work, and to play tricks on the viewer. Here’s he’s the oblivious young fool who creates havoc wherever he goes. In the opening shot, he’s behind bars – but he’s not in prison, he’s stuck outside the gates of his beloved’s grand home (she’s the mayor’s daughter). She won’t respond to the plighting of his troth unless he becomes "a big business man.”

In short order, he steals money from a cop, and is in turn defrauded by a sharpster who sells him furniture that’s not his to sell. He loads the goods into a wagon (the furniture’s real owner thinks Buster’s a moving man, and helps him load up, to Buster’s quiet amazement). He has some fun with the slow, old horse that pulls the wagon – he stops and gives the horse an injection from goat glands (the Viagra of its day). Rejuvenated, the frisky animal pulls Buster into the midst of a police parade.

While stopped in front of the parade grandstand, Buster reaches for a cigarette but can’t find a match. Improvidentially, an anarchist tosses a bomb that lands right next to Buster (it’s the stereotypical round shape with a long, sputtering fuse). He calmly lights his cigarette from it, then tosses it away. The subsequent explosion, comically tattering the uniforms of the marching men, sparks the chase.

What’s funnier than one cop chasing a hero? Hundreds. As Buster dashes to and fro, he finds swarms of cops on his tail. He nimbly avoids being collared time and time again, and eventually traps all his pursuers in their precinct house. However, his girl spurns him again, and he sadly unlocks the doors and allows himself to be swallowed up by a sea of clutching hands. The grim final “The End” title card is shown on a gravestone topped by Buster’s porkpie hat.

The NFR is one writer’s attempt to review all the films listed in the National Film Registry in chronological order. Next time: ‘Foolish Wives’.