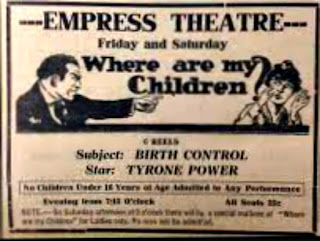 Where Are My Children?

She was the first American woman to direct a feature film, and the first to establish and run her own studio. She invented the split screen. She made hard-hitting moral dramas that were wildly popular in her time. She saw film as a persuasive medium through which she could evangelize her progressive Christian beliefs. Lois Weber is a rediscovered filmmaker, disregarded until critical reappraisal in recent decades. (I am unable to find and review her 1916 drama Shoes, which is also on the National Film Registry.)

She entered the business as a singer, performing for the chronophone, the first synchronized-sound playback system. Soon, in creative partnership with her husband, Phillips Smalley, she was making films in the “social problem” vein that were so popular in the 1910s (see my earlier essays on The Cry of the Children and Traffic in Souls). She wrote, directed, and edited her own fair-minded, naturalistic, and nuanced features, made money, and prospered for a time. 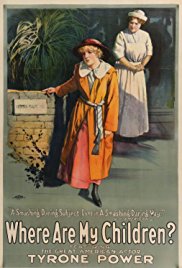 Where Are My Children? made Weber’s reputation, being Universal’s top-grossing film for 1916. Its topic, abortion, caused it to be banned in Pennsylvania. It stars Tyrone Power Sr. as a district attorney who prosecutes an abortionist, only to find that his wife and her “society” friends are all the doctor’s patrons.

This being 1916, Where Are My Children? is not a call for female sexual autonomy but a cry for responsible maternal fulfillment. It is pro-birth control, but anti-abortion. Its working title was The Illborn, and it opens with a schematic of baby souls, suspended in heavenly light and smoke, waiting to come down to Earth. It seems that there are “chance” babies, unwanted babies, and prayed-for babies, and we should all be shooting for Category Three. Unwanted children suffer in health, lack of resources, and exposure to dysfunction and violence. In short, they are a burden on the body politic.

The D.A. and his wife, though affluent, are listless and unfulfilled as they are childless. Everyone around them has adorable little children. The D.A.’s sister brings in her newborn, and we are advised that she has “contracted a eugenic marriage.” The theory of the time was that if potential mates were screened and eliminated from conjugal consideration for displaying deviant characteristics, wholesome and creditable offspring would result. “If the mystery of birth were understood, crime would be wiped out,” an intertitle states. A kind of home-grown breeding program. (This thinking led to marriage restrictions, compulsory sterilizations, and eventually Nazi genocide.)

As the D.A. mopes about, his pampered wife is busy surreptitiously referring her friends to the ominously named Dr. Malfit. (The depiction of the debilitating effects of the procedure as then practiced is not stinted.) “Never dreaming that it was her fault, her husband concealed his disappointment,” says the intertitle. The wife is not only letting own the human race, she’s letting down her husband and herself as a woman. The argument for birth control is independence inverted — it is women kept more at heel.

The plot turns on the seduction of the maid’s daughter by the wife’s brother (a cad and an obvious seducer — “Practice teaches men of this class the bold methods that sweep inexperienced girls off their feet”). Of course, she gets knocked up. Of course, the wife sends her to Malfit, who screws up. She returns, confesses, dies. The D.A. prosecutes the abortionist, who gets 15 years hard labor. Vengefully, he hurls his appointment book at the D.A., who opens it and finds his wife’s name, and those of many of her friends, inside. 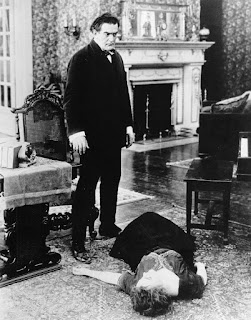 Tyrone Power Sr. is effective here in one of his few preserved silent film performances. His commanding and stern visage in the revelation scene gives the movie a powerful melodramatic edge. “Where are my children?” he cries to his wife, who collapses. Unfortunately, “. . . having perverted Nature so often, she found herself physically unable to wear the diadem of motherhood.” We are left with a scene of the two of them, sitting in misery, surrounded by their playful, flitting superimposed imaginary offspring. He shoots her a dirty look. End.

By 1922, moralizing stories were no longer popular, and Weber’s work was deemed too preachy and straitlaced. The movie industry was consolidating, and independents found themselves squeezed out. Weber, and other key early female directors such as Alice Guy-Blache and Nell Shipman, lost their production companies. Weber’s prowess and independent spirit led to her rapid engagement with most of the film companies on the West Coast, but she was unsatisfied. In 1927, she advised young women not to seek a career in the movie industry.

The NFR Project is one writer’s attempt to review all the films listed in the National Film Registry, in chronological order. Next time: Chaplin’s The Immigrant.