The NFR Project #58: Chaplin's 'The Immigrant' 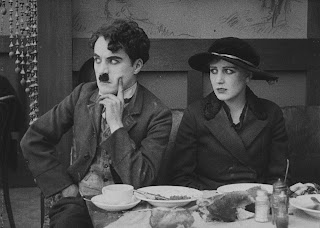 The Immigrant is a rare example of a perfect film. Chaplin was a genius, but he also shot 90 reels of film — 15 hours — to get those 25 classic minutes of The Immigrant. He didn’t follow a more traditional, cost-effective set of operational parameters. He didn’t storyboard, he didn’t budget. He did it by doing it, until he got it right.

Fortunately, he could afford to do so as he was at that time the most popular person in the world, and perhaps that the world will ever see. He became an international superstar in 1915, only a year after his first film appearance. As soon as possible, he began writing, starring in, and directing his own projects. His impeccable timing, his subversive wit, his cocky insecurity, his playful inventiveness, his endearing incarnation of the Little Tramp persona were all in service of a comedy that transcended language, perfectly understandable in all cultures by virtue of being entirely human. Chaplin makes sense all over the world because he deals in universal truths.

Here, the Little Tramp is in yet another outcast incarnation — that of the despised, frightened, and powerless immigrant. In an America swarming with new citizens, including Chaplin himself, the fears played upon in The Immigrant are connected to deep feeling, which creates more resonance, more laughs, and ages well. The film opens with a boatload of the tempest-tossed arriving in New York harbor. Chaplin riffs through a set of seasickness gags. He begins to heave in sync with Albert Austin, one of his repertory company, and the camera cuts away just as it seems the two are past the point of no restraint.

Chaplin builds a wistful romantic relationship with fellow traveler, the beautiful Edna Purviance. He aids her after her mother’s “poke” containing their savings is stolen. Charlie inadvertently wins their money from the thief, then gives her the lion’s share of the proceeds. That Chaplin can move instantly from slapstick to pathos and back again is a gift that is increasingly impressive as the years pass. No other film comedian has come close to it.

Some see The Immigrant as bearing the kernel of Chaplin’s left-wing political consciousness, which later caused him to be expelled from the United States, in 1952. In the film, he gives an officious bully of an immigration officer a kick in the behind (cited later as the part of the evidence for his expulsion). But the Tramp character is no respecter of persons, always ready to land a hearty kick on those he dislikes. (In fairness, the same officer gets to give the Tramp a kick in return shortly after.)

The film shifts to “Later — hungry and broke” as the Tramp waddles disconsolately down a city street. He finds a coin on the sidewalk, pockets it, and eagerly enters a restaurant, forgetting that his pocket has a hole. The remainder of the film builds masterfully on the premise of the poor man discovering his fiscal shortfall and trying to remedy it before his burly, aggressive waiter (another Chaplin regular, the enormous and beetle-browed Eric Campbell) beats the tar out of him.

Chaplin entwines his sequence with the first by bringing Edna into the picture, revealing her there dining as well. By film’s end, Charlie has paid the bill and found work for himself and Edna as artists’ models. In a short coda, the Tramp playfully wrestles Edna into a minister’s office. The End.

Chaplin came up with a smooth, integrated plot with characters we could invest in emotionally. This was years beyond contemporary comedians, who just strung gags together. Brownlow and Gill’s magnificent Unknown Chaplin shows that the restaurant sequence was the first to be shot, and that the romantic relationship, the artist’s involvement, and the marriage coda were worked and reworked into satisfying shape. In show business, it takes a lot of work to look effortless. Genius is in large part persistence.

The NFR Project is one writer’s attempt to review all the films listed in the National Film Registry, in chronological order. Next time: Mary Pickford in The Poor Little Rich Girl.