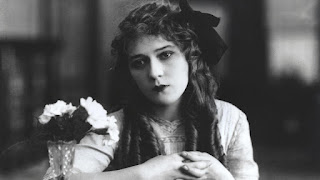 It’s difficult now to conjure up a concept of how popular Mary Pickford was. She bore the intimidating title of “America’s Sweetheart” (though born in Toronto) — the on-screen incarnation of an appealing, virtuous, spunky young woman with whom audiences fell in love. Just as Chaplin became world-famous seemingly overnight, so did Pickford after the release of her 1914 Tess of the Storm Country (my NFR essay on it here).

An intelligent and intensely professional filmmaker, she took control of her projects as a producer from 1916 onwards, introducing innovations and raising the bar for film quality across the industry. (Her director for The Poor Little Rich Girl was the top-notch Maurice Tourneur, whose The Wishing Ring we touched on here.) Her successes were so great that she formed United Artists with Chaplin, Douglas Fairbanks, and D.W. Griffith in 1919 — an effort to get out of under the already heavy hand of the film studios.

As a performer, she had range and depth, working in everything from slapstick to romantic tragedy. As a producer, she exploited her strengths to create a series of wildly successful films in which she played plucky children or pubescents — Rebecca of Sunnybrook Farm, Little Annie Rooney, the Little Princess — in short dresses, adorned with huge sausage curls. She was funny, feisty, and adorable.

The Poor Little Rich Girl is a typical tale of pathos. It is odd to see a vaguely bosomy 25-year-old play an 11-year-old, but the filmmakers cannily used tall actors to play the adults in the film, and scaled the settings and props accordingly, to make her seem as childlike as possible. Here she is Gwen, a coddled but emotionally neglected financier’s child who wants nothing more than to be paid attention to by her parents, or at least out playing roughhouse with the poor kids outside her brownstone mansion’s window.

Her character is high-spirited, which is I believe what we call obnoxious people we like. In one scene, she single-handedly destroys her ornate bathroom, leaping about like a maniacal dwarf. Finally, two of the servants, hoping for a quiet night off to go to the theater (and who can blame them?), give Gwen a double dose of “sleeping medicine,” which propels her into a hallucinatory land of dreams while her parents and her doctor struggle to save her life.

Gwen wanders through the Garden of Lonely Children, encounters Death, and rejects her in favor of Life, who is cavorting symbolically in forest groves in pseudo-Grecian attire a la Isadora Duncan. She sputters back to consciousness, her near-death experience having taught her selfish parents to abandon the pursuit of wealth and social prominence. Hey-ho! They will give up this city livin’ and go dwell in the country.

The espousal of "country" virtues -- honesty, unpretentiousness, goodwill -- is typical for the time. As millions shirted from rural to urban America, there was an immense backlash of nostalgia for the plain ways of rooted folks. Cities were associated with sin, corruption, and the unholy worship of the Almighty Dollar (in Gwen's drug-dream, her father, "made of money" by being symbolically clothed in it, works relentlessly at a machine that makes more -- capitalism kills the soul). As that way of life was exterminated, it was also celebrated.

This kind of sentiment went over big then, but does not resonate so much now. Periodically, we seem to need a child actor or “child” actor in our lives — witness the later superstardom of Shirley Temple. Pickford created the template for those who followed.

When Pickford got her Honorary Oscar in 1976, she was obvious unwell, struggling to make it through the interview. (It didn't help that she usually had a skinful.) She died three years later at the age of 87.

The NFR Project is one writer’s attempt to review all the films listed in the National Film Registry, in chronological order. Next time: Douglas Fairbanks Sr. in Wild and Wooly.