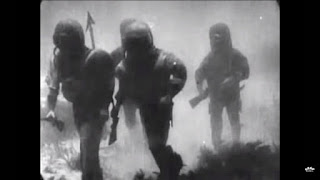 The inclusion of this version of Jules Verne’s epic, pioneer science-fiction novel on the list is due to its technical achievement – the first successful underwater filming for a feature film.

The most famous adaptation of 20,000 leagues Under the Sea is Richard Fleischer’s 1954 Disney-produced extravaganza. And there were a couple of attempts prior to the 1916 effort, and many since. This particular cinematic reworking was financed by the budding Universal Studios, which at the time was just coming into its own and was still known as the Universal Film Manufacturing Company. Led by Carl Laemmle, it was one of the first to break with the Edison-imposed, patent-based monopoly on film production.

By 1915, Laemmle had constructed his studio, Universal City, in California, just over the Cahuenga Pass from Hollywood. The forward-thinking Laemmle immediately opened his studio to tourists, charging them five cents a head, box lunch included – a tradition that continues today, albeit at a higher price point and without the meal. However, this film was shot on location in the Bahamas, on and around New Providence Island.

The reason? The location boasted crystal-clear waters at depth. This was vital to the attempt to film narrative under the surface of the water for the first time. The technological breakthrough that led to this was initiated by sea captain Charles Williamson, who invented an accordion-like apparatus of interlocking, waterproof iron sections that could be supplied with air and lowered to the depth of 250 feet, for aid in salvage and rescue operations. His son, journalist John Ernest Williamson, imagined the possibilities for taking photographs and moving pictures using the device.

The younger Williamson designed and built a spherical viewing chamber with a built-in, five-foot diameter, 1.5-inch-thick glass port. With the addition of an underwater lighting rig, he soon found he could capture usable footage. The gimmick was the linchpin of the production. With his brother George, John “directed” the effective underwater sequences.

The film itself is a passable adaptation. It combines Verne’s novel with its sequel, The Mysterious Island, fudging plotlines and adding a romantic subplot, a lost-child subplot, a revenge subplot . . . . What was once astonishing to filmgoers’ eyes is hard to gawp at now – it’s necessary to consciously wind back our credulity to a state it might have been in 101 years ago. If you can do that, then the fancifully clad undersea figures regain a bit of their totemic power.

The NFR Project is an attempt to review all the films listed in the National Film Registry, in chronological order. Next time: Hell’s Hinges.